I can’t tell you how to pronounce it, especially because the official logo includes a backwards S, but I can report that international clothier Desigual is taking over the space in NorthPark formerly occupied by Abercrombie.

In less prominent spots, signs indicate that Al’s Formal Wear is going in behind the Disney store and an Essensuals salon will open behind the former home of Bachrach (aka the future home of Justice).

In other NorthPark news, I let my 2-year-old walk/run around the mall for the first time, in lieu of his umpteenth trip through there in a stroller. When we got to Jonathan Borofsky’s Hammering Men sculpture, he stopped short and said, “Wow … what’s that?”

After digesting that for a few seconds, he pointed at the closest Hammering Man and said, “That’s tall.” 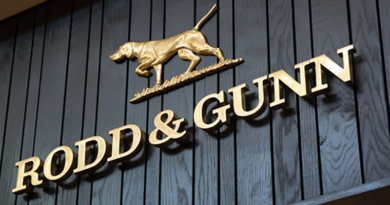 2 thoughts on “Desigual Coming to NorthPark”