Fourth-grader Charlsie Doan is a basketball player, a gymnast, a golfer, a violinist, and a pretty good fundraiser. More impressively, she does it all without the full use of her right hand. Charlsie was born with Symbrachydactyly, a congenital hand disorder. Earlier this month, Charlsie raised more than $50,000 for Kid Swing, a project of the Texas Scottish Rite Hospital, where Charlsie has been a patient since she was 6 months old.

For more information, read Hockaday’s press release after the jump.

DALLAS, Texas (May 13, 2011)  When you think of a ten year old girl you do not think of a fourth grader like Charlsie Doan. Charlsie was born with Symbrachydactyly, which basically means she was born without her right hand.  When you hear her list of activities you would never know her hand did not fully form. She plays basketball and golf, does gymnastics and even plays the violin.

Charlsie has been a patient at Texas Scottish Rite Hospital since she was six months old. Since the hospital’s inception in 1921, no patient family has been charged for services. The hospital operates solely on voluntary gifts from generous individuals, corporations and foundations. Charlsie and her family realized how much the hospital helped her physically and mentally, and decided to give back. Major corporations in the DFW area have heard Charlsie and other children like her speak about the benefits of Texas Scottish Rite Hospital.

KidSwing is an all kids golf tournament for children ages 7-18. The golf tournament raises money for Texas Scottish Rite Hospital. Just this year, KidSwing added another golf course to make a total of three courses full of kids swinging for a cause. Charlsie raised over $50,000 for KidSwing.

As a philanthropist, Charlsie has quit a future ahead of her. During the 2010-2011 school year, Charlsie worked with The Hockaday School’s Head of Lower School, Dr. Lisa Holekamp to determine a way to help Texas Scottish Rite Hospital. Dr. Holekamp encouraged Charlsie to think about things that helped her the most during her time at the hospital and she remembered how much art projects helped her cope with the challenges she was facing.

Charlsie, with the help of her mother and Dr. Holekamp, started an art supply drive with the students of Hockaday’s lower school. The collection boxes were overflowing with new art supplies being donated to the hospital. Friday morning, May 13, 2011, the fourth graders rounded up all the supplies to put them in bags for children at the hospital. Several of the students were on their way to deliver the supplies later that afternoon. In an article written by Charlsie, she says, “By helping people less fortunate than them, kids learn that there is more out there beyond their own little world. Getting out there, learning to give what you have, really lets you know that you are not alone on this chunk of rock.” 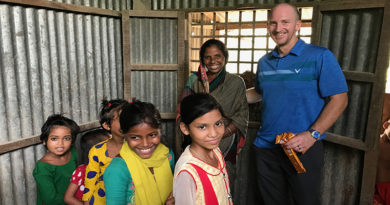