Retirement has not slowed down superintendent

Cathy Bryce is one busy lady. She is active on the boards for the YWCA and the Dallas Arboretum, does some educational consulting, spends time working with the Circle Ten Boy Scouts, and lends her intellectual muscle to the colleges of education at SMU and UNT. Can you believe these are her retirement years?

Even though she stepped down as HPISD superintendent in 2008, Bryce obviously still finds plenty of ways to fill her time. “I do,” she said, “but it’s a lot less than when I was a superintendent. … I never would have taken a vacation in August.”

During a phone interview last week, she was spending time with her husband, Jack, and one of their grandchildren in Colorado to beat the Texas heat. Although Bryce remains active, it’s definitely these kinds of fun and relaxing moments that she values the most.

“I love the flexibility of time so that I can be with my family,” she said. “Particularly, my husband and I love to travel, and we’ve gotten to do some extended travel that wouldn’t be possible with the sort of day-to-day demands of the superintendent’s work.”

As for the time that she gets to spend being a grandparent, Bryce said, “It puts tears in my eyes; I treasure that. After serving other people’s families and children for so long, and loving it so much, I knew that I would love to spend that kind of quality time with my grandchildren.”

Bryce graciously paid tribute to HPISD’s grandparents as the inspiration for her own success in that department.

“I got there and got to watch how intricately involved they were with their grandchildren,” she said, “and as we began to have grandchildren, that is what inspired me to want to spend that kind of quality time.”

And it’s qualities such as those that have kept the families, staff, and the eight years spent with HPISD in her thoughts today. When asked about her favorite memory during her tenure as superintendent, Bryce said that there were too many to pick just one. However after a brief pause, she eventually confessed, “I will tell you, winning that state football championship in 2005 after we had gone so many years without winning one; it was fun to be a part of that and to see our community and all of those alums come together.”

Before she went back to enjoying her time with her family in Colorado, Bryce wanted to add one final bit of praise to a community and job that she loved.

“I just had such a great time there, and it was just one of the highlights both for my husband and I,” she said. “For me professionally, but for us personally we just absolutely had eight great years there, and we’re so glad to have been a part of it, and now we get to cheer from the sidelines, and it’s great to be there too.”

Kara Mauerhan is an intern for People Newspapers.

ALSO IN THE NEWS …
On Jan. 7, June Jones was named SMU football coach, replacing the fired Phil Bennett. Formerly of the University of Hawaii, Jones signed a contract worth $2 million annually — the most in Conference USA.

On Feb. 22, SMU president Gerald Turner announced the school will be the site of the George W. Bush Presidential Library.

On May 10, James “Blackie” Holmes keeps his seat as mayor of University Park, and Park Cities voters approve HPISD’S largest bond package in history — $75.4 million, about half of which was designated for new classrooms.

CHANGES AT THE TOP
On Feb. 29, Darrell Fant retired as Highland Park’s public safety director after 32 years of service.

On June 6, we reported that Jeremy Gilbert would be Hyer Elementary’s new principal.

On June 30, we reported that George Patterson, credited with keeping Highland Park in good financial standing for nearly 30 years, had decided to retire from his post as town administrator.

Visit Wonderland With HPMS This Weekend 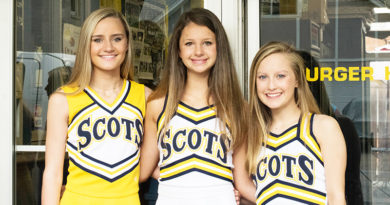