Last night, the Kansas Jayhawks lost to the Kentucky Wildcats.

Normally this wouldn’t be a topic of conversation for Park Cities People (especially since it doesn’t include my beloved Saint Joseph’s Hawks), but after a tidbit I learned last night, maybe it should be.

Before last night’s University Park City Council meeting, I was chatting with George Ertle, assistant to the city manager. We somehow got on the topic of alma maters, which led George to say he was graduate of my Atlantic 10-rival Dayton University, and of Kansas University, for graduate school. He then rattled off the list of other KU alums in the city’s administration:

George went on to tell me that KU has the best (no bias, of course) city manager program in the country, so lots of alums trickle down to local municipalities.

So if you’re paying off a ticket at City Hall today, try to be kind. 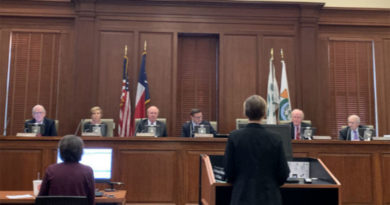 UP Approves Bid for Traffic Signal Upgrades Near Hyer Elementary

One thought on “If UP City Hall Seems a Bit Down Today, Here’s Why”