Every two years, when the University Interscholastic League unveils its realignment and reclassification of districts, tons of football coaches gather at Birdiville ISD Fine Arts/Athletics Complex the morning the new districts for the next two years are released.

Once that happens, coaches from the new districts meet and set their district football schedules. Coaches also finalize their non-district schedules, once they know how many district games they’ll have. It’s always a madhouse. And it’s always a blast.

This morning, I got to go out and cover that very event, which is always one of my favorite things to do. As Dan posted earlier, Highland Park found out which teams will be in its new district for football, basketball, baseball and several other sports.

We already knew Highland Park’s football team opens next season against Aledo in the Tom Landry Classic. The rest of the schedule has the Scots hosting Tulsa Northeast Oklahoma Association of Home Schools and going to Sherman to round out non-district play. Highland Park will then have a bye week before opening District 10-4A play at home against Forney. The Scots will then play back-to-back road games at North Forney and Mesquite Poteet. Highland Park then hosts West Mesquite, travels to Carrollton Creekview, and then hosts Carrollton Newman Smith and Terrell to close out the regular season.

If Temps Are High, Pools Should be Open 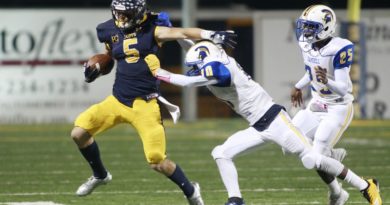 Milestones Within Reach for Unbeaten Scots