In the longest thief foot chase — although I have nothing to put this claim against — in NorthPark history,  a woman chased down a man who had stolen her phone at 5:55 p.m. last Monday while she was dining at La Madeleine.

The thief snatched her $500 iPhone from the table she was sitting at and took off towards Center Park. The victim immediately bolted after him as he weaved through the garden area and ran out the North doors by Kona Grill.

She did not let up as the suspect cut through the parking lot towards Park Lane, but eventually lost sight of this cross-country criminal as he crossed over North Central Expressway.

The map shows the potential path they may have taken and here is my unofficial distance ran by the two: Far.

This event took place a day before NorthPark announced their new curfew for 17-year-olds and younger. Which would have nothing to deter this ruffian who was believed to be in his late-20s or early-30s.

My only thought: Why does no one find a woman chasing a man through the mall suspicious?

Want to Not Get Your Car Stolen? DPD Can Help You Out Tomorrow 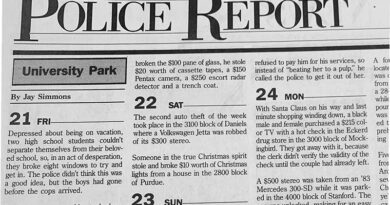 Skulduggery of the Decades