Days after being abducted from Petland in Preston Forest Square, a rare parrot has been returned to the shop it was raised in.

Petland General Manager Chris Brauer said the red Solomon Island Eclectus was stolen Thursday and returned by a man who had purchased the bird from a homeless person for $100.  After the man realized he was in possession of the stolen bird, he contacted Petland and brought the bird back.

The theft took place at 7 p.m. Thursday, when a woman and an accomplice went into the pet shop and walked out with the bird. Security camera footage shows her walk past employees and out of the busy store with the $1,700 bird perched on her shoulder.

Brauer said he recognized the suspects as people he knows who paint curbs for money and frequent the store. After a series of events — including having a man separate of the offense come and retrieve the thief’s forgotten purse — Brauer said the woman was finally in custody.

Thankfully, the birds feathers aren’t too ruffled. Brauer said parrots have the emotional equivalent of a three-year-old and are prone to react severely to change or stress. So when the bird was returned a little stressed, but overall in good condition, Brauer said the store was thankful.

“When you get to extremes; it’s hard to fix or they don’t recover from it,” he said. “Birds live a long life — this one being 40 to 50 years. And if that bird was damaged in that way, to be honest, it would be a very sad condition.” 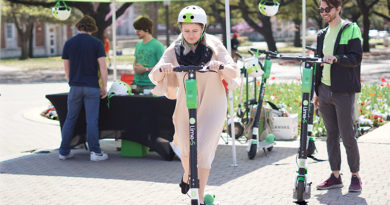 Someone Get Officer Big Mac on The Phone