Dr. Eric Bing, director of global health at the George W. Bush Institute, had a special story to share with members of America’s Future Foundation yesterday, a group of local young professionals devoted to opportunity advancement.

The story was of an infant abandoned by her mother, and raised by a neighbor with an already-numerous family. By her teenage years, the girl had dropped out of school and started her own family. By adulthood, she was dying of cervical cancer.

The woman was Dr. Bing’s mother, and his relationship with her left a mark on the man he is today. With the Bush Institute, he works on ways the free market can impact health issues like cervical cancer in developing countries.

While the rain poured outside Bistro 31’s windows in Highland Park Village, listeners shared thoughts on how people in the Park Cities could help those in a country 8,000 miles away.

“The solutions aren’t easy to work out,” he conferred with the audience.

Not only is Bing the director of the Bush Institute’s global health initiative, he is also a professor at SMU and co-author of the book, Pharmacy on a Bicycle.

“President Bush was instrumental in radically changing the way we do HIV care in developing countries,” Bing said.

The former President and Mrs. Bush recently traveled to Zambia to help prepare a cervical cancer clinic. But Bing stressed that this initiative is not just for employees of the Bush Institute.

“This isn’t just the Bush Center, this is the greater community,” Bing said. “It’s understanding that we’re in a connected world — solutions that come from there may work here.” 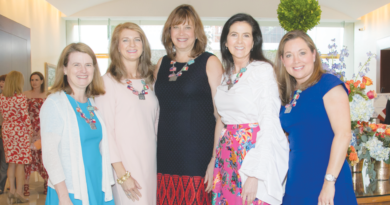 Dispose Leftover Prescription Drugs With UP