Max Fuqua decided it was time to help out Highland Park schools through frozen yogurt sales, especially with the district’s 100th anniversary coming up next year.

“A customer told me another yogurt shop was doing a promotion of 15 percent, and I thought it was weak,” he said. “If it’s for the schools, it should be 100 percent. I grew up here, and I went to those schools; I thought it sounded like the right thing to do.”

That’s why he’s invited the schools of HPISD to participate in his “100% Campaign,” intended to gear up for the centennial. A school picks a day for students and their familes to come in, and 100 percent of the proceeds from frozen yogurt sales go back to that school.

University Park Elem-entary has already completed two events, with more than 60 families attending each day, and more than $400 raised.

On Sept. 20, the proceeds were scheduled to go to McCulloch Intermediate School and Highland Park Middle School. Though the rain may have prevented a huge crowd from building, there was no lack of enthusiasm.

Schneider and his friends first made their selections; customers can choose from coconut, vanilla, chocolate, berry, and peach. Then the kids were free to roam wild in the “Fro Yo Disco.”

Plaza Health Foods’ back room, with its wooden floor and mirrored wall, is normally used for weekly Zumba and barre exercise classes. But when kids come in after school, especially on Fridays, it turns into a weekend-ready party scene with disco lights and music.

“The kids were jumping around and having a good time — we had a lot of yogurt,” said Lucy Hooker, who helps Fuqua keep shop on days scheduled for events.

For Fuqua, helping out the schools is a way of honoring his grandmother and father, who previously ran the shop, which opened as a bakery. A photo of his dad’s 1938 class at Armstrong Elementary even hangs over the cafe tables as a reminder of the store’s connection to the community.

“The community supports it; that’s what’s really amazing,” Fuqua said of the family-owned operation. “We have some families that are fourth-generation customers.”

As for the yogurt sales, Hyer Elementary is already scheduled for a day in October. He hopes other campuses will join in the fun as well. 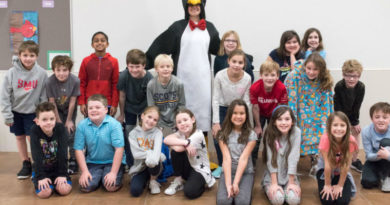 Woman and Neighbor Subdue Burglar Until Cops Can Arrive