It took a little bit longer than normal, but the Highland Park Scots finally hoisted the Class 4A state championship trophy once again.

After having the state tourney delayed and moved twice, the Scots rolled past Montgomery, 10-1, on Wednesday afternoon in Waco to claim their sixth straight state title and 15th overall. Highland Park dropped only a boys doubles match in disposing of the Bears.

The tourney was supposed to start with the semifinals at 1 p.m. Monday in College Station. Typically, the state tournament is on Friday and Saturday. However, a Texas A&M home football game forced the UIL to change it to Monday and Tuesday, or so it thought.

Instead, the 4A semifinals ended up being pushed back to Tuesday afternoon at an indoor facility in Houston. The Scots beat San Antonio Alamo Heights, 10-3, in a rematch of last year’s finals.

Highland Park finished the season with a perfect 22-0 record. The Scots have not lost a dual match since 2007. 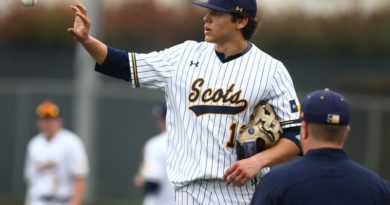