Matthew Stafford entered yesterday’s game 68 yards shy of the Detroit Lions’ career record for passing yardage, which was held by another Highland Park High School graduate, Bobby Layne. Stafford surpassed his fellow Scot’s standard on a 79-yard touchdown toss to Calvin “Megatron” Johnson in the second quarter, the only quarter in which Detroit scored during a 37-27 loss to Pittsburgh. Stafford finished the game with 362 yards, giving him 16,005 as a pro. 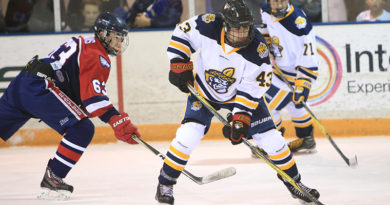 With Runner-Up Finish, Scots Are No Longer on Thin Ice

Former Scots in Fort Worth Regional