Based on Dan Branch’s Twitter feed, I thought the Park Cities’ state representative did nothing these days but speak to Republican women’s groups in small towns across Texas. (He’s running for attorney general, in case you hadn’t heard.) But here’s photographic proof that the University Park resident was at the Morton H. Meyerson Symphony Center on Feb. 8, when his daughter Sarah was one of 38 Dallas Symphony Orchestra League debutantes to do the Texas Dip.

Dixey Arterburn served as ball chair, and her daughter Libby was among the debs. The honorary chairs of the event were Gene and Jerry Jones, who had two granddaughters making their debut: Haley Anderson is the daughter of Shy and Charlotte Anderson, and Jordan Jones is daughter of Karen and Stephen Jones.

We just sent our March edition to the press, so look for more ball photos in our April edition, which should start arriving in mailboxes by March 22. 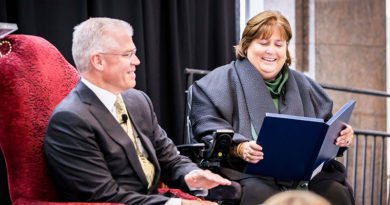