Tom Thumb plans to close its Highland Park Village store in the next 12 months, the grocery chain announced today.

“We have enjoyed being in Highland Park Village over the years, but the store is small and outmoded by today’s supermarket standards, with no opportunity for on-site expansion,” Tom Thumb president Paul McTavish said in a news release.

According to a timeline on the Highland Park Village website, the store opened in 1935 as a Safeway. As you may have heard this week, Safeway is in talks with potential buyers.

Those talks are not mentioned in today’s news release, which says the Highland Park Village store is only 18,500 square feet, while the average Tom Thumb is 46,000 square feet. The release also points out that there is a larger Tom Thumb about 1.5 miles to the northwest, at Inwood Road and University Boulevard.

“That’s where I shop, and that’s where my pharmacy is,” Holmes said. “It’s small, but it’s a friendly place where you see everybody you know. So it still has that kind of hometown feeling.”

There was no word on what type of tenant Highland Park Village might pursue to replace Tom Thumb. Stephen Summers, the Village’s director of leasing, is in Europe and not available for comment. But the news release did include this statement from him:

“Tom Thumb has been an excellent tenant and great neighbor for us. We understand and respect their decision to leave Highland Park Village to better compete in this marketplace.”

Marquee Changes Its Name, Everything Else 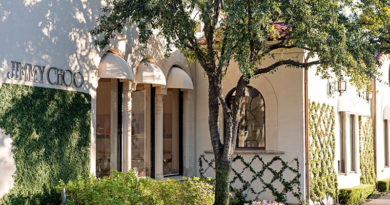 Deno’s of Highland Park Getting a Face Lift