Everything about Highland Park is first rate, and that includes videos explaining fatal police shootings. Of course, there’s only one such video, because there’s been only one such shooting in the town’s history. The video you see here was shown at this afternoon’s news conference concerning the June 2013 death of David Hartman.

If you don’t want to watch the video — which includes dash-cam footage of the incident as well as dramatizations — here are a few new facts we learned today:

“Mr. Hartman died because he came to our community on a stolen motorcycle, high on drugs, armed with the tools of the criminal’s trade,” DPS Director Chris Vinson said at the news conference, which happened the same day that a grand jury “no billed” the case, after independent investigations by the sheriff’s department and the district attorney’s office.

Vinson said McGinnis and Peacock did not find the gun “deep inside” the pocket of Hartman’s cargo shorts because he strategically shifted his leg as they were patting him down in the back seat. “The search was imperfect,” Vinson said, and all DPS officers have undergone training in proper techniques since then.

“What I want our citizens to know,” Vinson added, “is that when someone calls the Highland Park Department of Public Safety to report suspicious activity, our officers respond. They back each other, and — as you will see in the video — they put their lives on the line to protect our citizens.”

If You Haven’t Met Tamborello, You Have Plenty of Opportunities 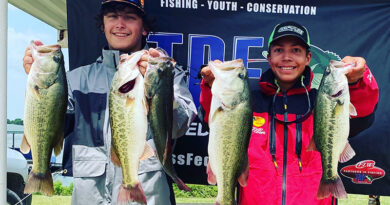 This Highland Park Middle Schooler is the Reel Deal