UPDATE: The commission voted to table a vote on the proposal until its Oct. 2 meeting, in part to allow time for a land-use study of the area. Read below for background, from a Thursday morning post.

The Dallas Plan Commission is scheduled to vote today on a rezoning request for Highland House, a high-rise apartment complex proposed by Crosland Group in the 8200 block of Westchester Drive, near the heart of Preston Center.

City staff is recommending denial of the request, which has drawn scrutiny from residents of both the Park Cities and Preston Hollow. The commission’s meeting will begin at 1:30 p.m., and will include a public hearing.

The original proposal would have made Highland House the king of the Preston Center skyline at 29 stories. Now, it’s been lowered to 22 as a concession to concerned neighbors, but the desire to make a statement remains.

The plan calls for a maximum of 210 units over 16 stories, with a parking garage that would consume six levels both above and below ground. Apartments would average about 1,300 square feet, with rental rates of $4,000 to $5,000 per month.

Anything over nine stories at that site requires rezoning approval from the city of Dallas. Opponents cite the height of the project, as well as traffic and infrastructure concerns.

“The current traffic is a complete nightmare,” said former Dallas Mayor Laura Miller, who is part of a group opposing the plan. “The people want a better solution.”

Crosland contracted with the DeShazo Group, a Dallas consulting firm, on a traffic study that concluded the Highland House project would have a positive impact on traffic in the area compared to the existing medical complex, even if perceptions might suggest otherwise.

But she suggested that before a precedent is set with the approval of a single project, perhaps a grander plan could be established — something that would create guidelines to account for traffic and infrastructure concerns from businesses and residents alike.

“We want there to be a bigger, better solution,” she said. “We know change is coming. There’s going to be more height. But how are you going to deal with the crumbling infrastructure and traffic problems? You can’t just approve these one by one.”

Williamson said the company wants to change the perception of Preston Center and bring it in line with competing suburban projects.

“This is an incredible mixed-use development. The one thing it’s missing is a residential element,” Williamson said. “We want to provide housing for the people who are using Preston Center now. This is build for people in these neighborhoods. It gives them a place to downsize and still have all the amenities they’re used to.

“This is the start of the retooling of Preston Center into what we think it could be.” 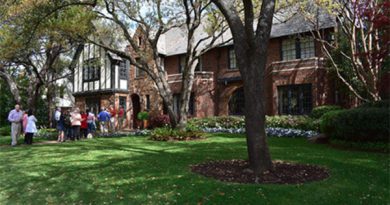 Class of 2015 Honored by YMSL Chapter