Yesterday, Ray Washburne and Becki Snow of Highland Park Village met with members of the HP Town Council in a work session to discuss the Village. Heads up: they have no plans to install a hotel or underground parking.

“We looked at it,” Washburne said of both options. “Economically, it doesn’t make any sense to do it.”

As for parking problems, Washburne called them an “urban myth” and stated that any issues with parking generally occur around the Christmas holiday and other special events.

Major changes that are coming mainly consist of retail or restaurant comings and goings. As many know, Safeway Inc. did not renew Tom Thumb’s lease, so an undisclosed, boutique grocer will move into the corner spot to face Preston Road.

Number One will move to an interior-facing spot, and St. Michael’s Woman’s Exchange will move down a spot.

“That building hasn’t been renovated in a while,” Washburne said.

Hermes, which now occupies the old Williams-Sonoma spot, will become two-story to house more inventory such as furniture.

Patrizio’s did not renew its lease, so the space will be converted to house another undisclosed restaurant of American fare. A doctor’s office above Patrizio’s has already been vacated to accommodate the new restaurant.

Other changes are mainly cosmetic, such as adding ivy along Mockingbird Lane and “cleaning up” alley areas near Jimmy Choo and Patrizio’s to increase aesthetic appeal.

Eventually, Washburne would like to replace the sidewalks — which date back to the 1970s — with brick.

“I wanted, when you walk in the Village, to feel like you’re in a European town,” Washburne said.

Washburne said the Village met with residents of Potomac Avenue to hear their concerns.

Throughout the meeting, he reiterated that his willingness to meet with anyone who wants to discuss the Village. After all, the Village only gets a fraction of the correspondence from residents the Town gets.

“Our number-one concern is our neighborhood,” Washburne said.

Members of the council addressed the fact that the “rumor mill” has run rampant about tenants that are and are not leaving the Village, or a “master plan” for development. An example: Deno’s and Mi Cocina are staying put, despite rumors indicating otherwise.

“From my perspective, these are housekeeping issues,” Mayor Joel Williams said. “I believe [representatives of the Village] have been very honest.”

At the suggestion of council member Bob Carter, Washburne indicated an interest in holding an “open house” in September for residents to ask questions regarding developments.

Council member Stephen Rogers also requested an update on costs at the next council meeting regarding the study of Village traffic conducted by NelsonNygaard.

The council generally expressed that costs will come in lower than anticipated, because much of the study had been planned to anticipate major changes to the Village’s planned development district.

“We thought at one time there would be comprehensive changes to the PD,” Williams said. “It’s unnecessary.”

DCC Will Celebrate Fourth With Fireworks 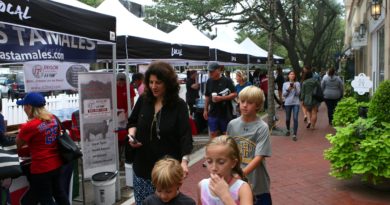