Nick Kraus spent his senior year as the student body president at Greenhill, in addition to being captain of the school’s track and cross country teams. He was active in film classes and an improv troupe, in addition to a host of other extracurricular activities.

Yet the Bluffview resident also found time for academics, becoming the school’s first U.S. Presidential Scholar in more than a decade. He admits achieving that balance was a challenge during the past four years.

“I didn’t want to sacrifice anything or let anybody down,” Kraus said. “Through these four years, I think I’ve learned how to manage it pretty well. Everything I’m involved in means a lot to me, so I didn’t want to give anything up.”

He graduated on June 1, and will attend Stanford beginning in the fall, where he plans to major in either political science or engineering.

His diverse set of interests stems in part from a unique resume of summer jobs. Kraus worked for an oil and gas company for one summer, and another he was in the historical manuscript department at Heritage Auctions. Two years ago, he was a U.S. Senate page for majority leader Harry Reid.

Kraus returned to Washington on June 22 for a ceremony recognizing the U.S. Presidential Scholars, where he received a medallion. Genie Burke, his political history teacher at Greenhill, was there to share the moment.

“I was front and center in the Capitol, so that was very exciting,” Kraus said about his time as a Senate page. “Just getting to spend a little more time in Washington is something I’m really looking forward to.”

The U.S. Presidential Scholar program recognized 141 high school seniors nationwide, from a pool of almost 4,000 candidates, for their achievement in academics and the arts. Kraus is one of just seven honorees from Texas.

This story appears in the July edition of Preston Hollow People, on stands now. 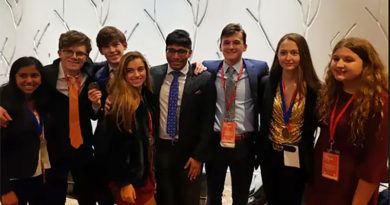