Jesuit maintained its dominance over neighborhood rival W.T. White on Thursday in the annual “Battle for the Saddle” showdown at Loos Stadium.

The 58-24 victory also clinched a playoff spot for the Rangers (6-2, 4-1), while knocking the Longhorns (4-4, 2-3) precariously into fifth place in the District 9-6A standings with two weeks left in the season.

As expected, the matchup featured plenty of big offensive numbers on both sides, including a combined 45 points in the first quarter alone.

Jesuit scored on a trick play on the first snap, when receiver Charlie Eikenberg found Garrett Amy for a 59-yard touchdown pass. Eikenberg caught a 75-yard scoring pass from Bo Schneider later in the opening quarter, while Amy had six receptions total for 173 yards.

Schneider completed just eight of 17 passes, but they accounted for 232 yards. He threw his 31st touchdown pass of the season, as well as his second interception.

It was the third straight win for Jesuit, which has scored more than 50 points in all three of those games.

Jackson Fults was a bright spot for White with touchdown runs of 52 and 59 yards in the first quarter. He finished with a game-high 163 yards on 22 carries, but struggled in the passing game. Dejuan Pullen caught five passes for 134 yards.

The Rangers will play their final home game next week against Irving MacArthur. Both teams are tied for second place in 9-6A, but the outcome likely won’t have any playoff ramifications because MacArthur will be in the Division I bracket and Jesuit will be in Division II.

Meanwhile, the Longhorns face a critical road game against Irving Nimitz that could determine the postseason fate for both teams.

Other results from key games this week:

Justin Jones and Walter Johnson each ran for two touchdowns as the Lions (6-3, 5-2) won their fourth straight game and earned an SPC playoff game on Saturday at Bellaire Episcopal. Ryan Bradberry rushed for 197 yards and two scores for the Hornets (3-6, 2-5), and also threw a touchdown pass on a trick play.

The Panthers (7-1, 4-1) clinched their first playoff berth since 2010 and snapped a three-game skid against the Wildcats (5-3, 3-2). Arico Evans ran for two touchdowns and threw for two more, and Terell Haley finished with 125 yards rushing. Hillcrest took a 35-6 lead in the third quarter and held on late.

The Eagles (7-2, 3-2) returned to form after two straight losses as Thomas Fitts threw for 319 yards and five touchdowns, including three first-half strikes to Winston Guillory. Jack Johnson tallied 197 rushing yards and two scores for ESD, which will host Holland Hall in an SPC playoff game on Saturday.

Nahshon Ellerbe scored with 2:55 left to break a tie and lift the Trojans (4-4, 2-3) to their second straight district victory. Christian Hutzler threw four touchdown passes and Parker Oliver caught 10 passes for 129 yards and a score for TCA, which rallied from an early 17-0 deficit against the Warriors (5-3, 3-2).

Another week, another blowout win for the Panthers (7-1, 4-0) in TAPPS district play. Dominic Williams tallied 145 rushing yards and four touchdowns on just seven carries, and the Parish defense limited the Lions (4-5, 2-3) to just seven yards rushing. Tom Stewart threw for two scores and ran for another. 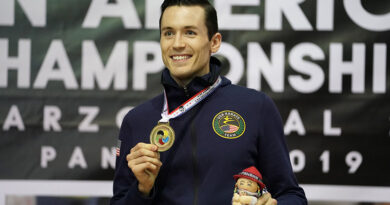