Highland Park ISD still doesn’t know where it might build a new natatorium as part of a potential upcoming bond initiative, but perhaps a push to acquire more land adjacent to Highland Park High School provides a new option.

The HPISD board of trustees on Monday gave its approval to secure two lots totaling 0.62 acres in the 4100 block of Lovers Lane previously occupied by apartment buildings.

The district plans to make an offer to buy the properties first, and they can’t agree on a price, then will use the power of eminent domain. The land, located across the street from the HPISD administration building, could be used “to address parking and facilities needs,” according to a district press release.

One of those needs is a location for a natatorium, since HPISD officials have indicated the desire to eliminate the current natatorium inside the high school building in favor of more classroom space.

On Monday, HPISD superintendent Dawson Orr said the district would form a natatorium subcommittee as part of its facilities advisory committee, which is studying potential components to a bond initiative HPISD hopes to send to voters in May. The subcommittee will identify and evaluate potential natatorium sites, including land already owned by HPISD.

The options still include a partnership with the city of University Park, which is awaiting results of a feasibility study regarding construction of a aquatics center at Curtis Park, next to the existing outdoor pool. The collaboration has been met with widespread public criticism because of parking, traffic, and environmental concerns.

Orr also mentioned Germany Park, which also is owned by UP and features a running track used by the district for track practices and meets.

He ruled out a partnership with the Park Cities YMCA, which will rebuild its facility in 2015 but won’t have enough space or parking to suit the district’s needs.

“Their facility will not support what we need in a high school swimming program,” Orr said. “There’s simply no way that could be a shared facility.”

HPISD also is discussing a potential partnership with SMU for use of its pool, but Orr said that’s unlikely because of scheduling and staff issues that include NCAA guidelines restricting contact between college coaches and high school athletes. 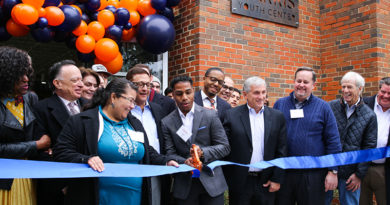 12 thoughts on “How Will District Use New Land Near HPHS?”