Elizabeth Waggoner Lambert and Steven Andrew Richert exchanged wedding vows on July 26, 2014 in the Sanctuary of Highland Park United Methodist Church. The ceremony was officiated by Rev. Matthew Alfton Tuggle, and the Very Reverend Stephen Haltom Bancroft, godfather of the groom. A reception followed at The Room on Main with music by Inside Out, floral arrangements by Three Branches Floral, and Caroline Jurgensen Photography captured the photographs for all of the events. The rehearsal dinner was held Friday night at Sammy’s Bar-B-Q and was hosted by the groom’s parents for the wedding party, close friends and family.

The bride is a 2000 graduate of Highland Park High School. Elizabeth received her Bachelor of Business Administration from the Terry School of Business at The University of Georgia. She is a member of Kappa Kappa Gamma sorority, and is employed as a manager for Deloitte Tax LLP.

The groom graduated from the Kent School in Kent, Conn. in 2000. Andrew received his undergraduate degree at Vanderbilt University, and served as a Captain in the US Marine Corps. He is a member of Sigma Chi fraternity. He received his Masters of Business Administration from the Cox School of Business at SMU and is working as a manager for Permian Transport and Trading in Midland, Texas.

Following a honeymoon trip to Bodrum and Istanbul, Turkey, the couple has made their home in Midland.

Reserve Your Ad For ‘I Do’ By October 10 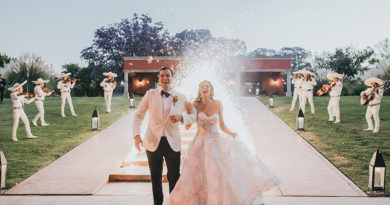