[pullquote-left]“I thought this was a kind of dancing that I could be proficient in and that it would appeal to different people…”[/pullquote-left]You could say that Peter Sommers likes to dance to the beat of his own drum. That’s because the Highland Park High School senior is the first-ever boy to perform the school’s beloved “Drum Dance,” a Scottish-inspired tradition usually performed during halftime of senior night at Highlander Stadium.

“I watched two groups of people do it, and it just really appealed to me,” Sommers said. “It was a really cool experience and I would completely do it again.”

The dance dates back to the 1940s at Highland Park, but in recent years, it’s been a tradition for a senior from color guard to perform it. Therefore, Sommers was in a very small pool of competitors. He auditioned just three weeks before the performance, and started practicing a week out.

“I thought this was a kind of dancing that I could be proficient in and that it would appeal to different people,” he said.

Usually, dancers are just handed a video from past performances to learn and imitate. But this year, that just wouldn’t work.

“When I first viewed the video, it was just more feminine,” he said. “There was a certain move that was more like a kick. It was an interesting move for me, as a male, to do.”

It also wasn’t a fully authentic version of Scottish dance. Luckily, Sommers had already taken dance classes to improve his sense of movement with Jacqueline Porter of Park Cities Dance.

As it turns out, she’s also a traditionally trained Highland dancer whose mother grew up in Glasgow, Scotland. Her mother ran a Highland dance school in Pennsylvania, and Porter danced competitively until age 8, when she switched to ballet.

“It was an unusual coincidence,” Porter said. “I always wanted to start a Highland program.”

Thanks to her knowledge, they were able to revert the routine back to a more traditional version of Highland dance — which was originally developed for men preparing to go into battle, by the way — and modified it to fit on top of a drum.

“It was actually the authentic Highland Fling that he did,” Porter said. “It has been danced for 300 years.”

Porter was present for Sommers’ performance at the stadium on Nov. 7.

“It was an unbelievable feat,” she said. “That would be difficult for any actual Highland dancer — a person who had been doing it for years.”

In light of Sommers’ success and Porter’s revived passion for the dance, she’s starting a Highland dance seminar to her studio’s repertoire. She will hold two, eight-week “Learn the Highland Fling” courses for kids and teenagers starting Jan. 8 on Thursday afternoons.

“It’s an exceptionally athletic dance,” she said. “People become so obsessed with it — anyone can achieve some level of proficiency in it.” 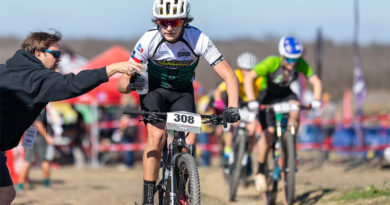 Trail Boss: Freshman Races Past His Dad on Mountain Bike