When Maddie O’Laire was trekking through the Himalayan mountains in Nepal, she had a random encounter with a father-and-son duo from Homer, Alaska, that wound up changing her life.

“They told me that Homer was the most beautiful place in the world,” O’Laire said. “They encouraged me to come up there and visit.”

Five years later, O’Laire is convinced they were right, and not just for the scenery along the southern Alaskan coastline. The Highland Park High School graduate met her husband, Mike, in Homer, where she now lives and operates Smart Source Seafood, a commercial provider of fresh sockeye salmon.

O’Laire, formerly Maddie Fuller, was a volleyball standout at HPHS who graduated from Loyola College in Baltimore with a communications degree in 2009. Since jobs were scarce during that time, she accepted a teaching position in Thailand that also allowed her to travel throughout Asia.

After her job there ended, she returned to Dallas to try and settle down, but wasn’t satisfied. So in 2010, she booked a one-way trip to Homer, became enamored with the area, and took a job as a waitress.

The following year, she met Mike, a commercial fisherman originally from the Seattle area. The couple was married in 2013 by Sean Martin, the man she met in Nepal, and built a house in Homer that they share with Mike’s young daughter, Iris.

Before they launched their direct-market seafood company in September, Maddie was a columnist for the local newspaper in Homer, a city of about 6,000 people on the tip of the Kenai Peninsula south of Anchorage.

[pullquote-left]Have a hankering for salmon now? Check out their website for pricing and portion info.[/pullquote-left]These days, Maddie manages the business while Mike fishes with his longtime crew members in Bristol Bay. Their giant gillnets can catch about 10,000 pounds of fish per day during the peak season, which lasts for about six intense weeks during June and July. After that, the salmon are custom processed and put into cold storage, ready for shipping throughout the ensuing months.

At first, Maddie would offer salmon to acquaintances in the Park Cities via email. Her local connections continue to provide about 90 percent of the company’s business, despite a geographical separation of more than 4,200 miles.

“I love it up there. It’s total culture shock coming [to Dallas],” said Maddie, a fitness aficionado who has competed in both marathons and cross-country ski races in Alaska.

Customers can order one big box of fish to last the entire year, or smaller monthly shares. She said wild sockeye salmon has health advantages because of a lack of pesticides and water contamination, and since the fish weren’t harvested in hatcheries or fish farms.

“It’s a premium product,” Mike said. “People are expecting the filet mignon of fish, and we provide that.”

As the family builds its business, Maddie said that her friends back home have been supportive of her unusual career path.

“They think it’s really cool. Everybody is inspired by people taking a leap of faith,” she said. “We’re able to share something that we’re passionate about with our family and friends.” 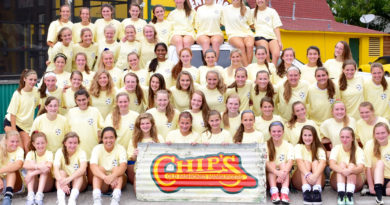