The Parkland Foundation announced that it reached a final $150 million fundraising goal to go toward the new hospital campus on Thursday. More than 12,700 donors contributed to the public-private funding initiative, with donations ranging from 50 cents to $50 million.

The new hospital will open in August, and cost $1.32 billion total. Many members of the Park Cities community such as Caren Prothro and Ruth Altshuler were involved with the I Stand for Parkland campaign. Plaques and displays will honor the donors, in addition to a window along the lobby and pedestrian bridge that will house names of those who donated $10 or more. That segment alone accounts for nearly 9,500 gifts and more than $300,500. Dallas County also approved a $747 million bond campaign in 2008, which helped the project get off the ground.

“The way the people of Dallas County came together to raise this money is an inspiration,” said Parkland Foundation president and CEO David Krause. “From patients and families at our community clinics, who put pocket change in a jar, to great benefactors like the Harold Simmons Foundation and The Rees-Jones Foundation, the outpouring was truly communitywide.” 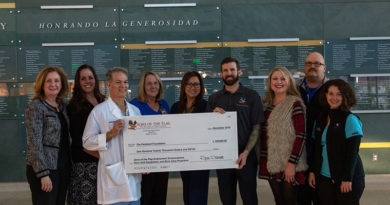