“Ladies … the time you spent in the mirror this morning for Mr. Costner paid off,” Dallas Police Department chief David Brown said during his opening remarks at the New Friends New Life Wings luncheon, where Academy Award-winner Kevin Costner was the keynote speaker.

Yep, that was pretty much the overall vibe: adoration. Many a donor got to shake hands with the icon during a VIP reception prior.

Costner participated in a Q&A session with former WFAA movie critic Gary Cogill while guests dined. Mainly, Costner shared stories from his acting and directing career, such as convincing his father he could make it as an actor, interacting with an emotional Dances With Wolves fan, and spending a day with President George H. Bush in the White House pool while filming JFK. But there was a more serious purpose to the luncheon underneath.

“My daughters know what a man’s hands feel like that love them, and some of these women have not been told they were special and had hands on them that love them so that they know the difference,” Costner said when asked about the group’s mission to fight human trafficking in Dallas. 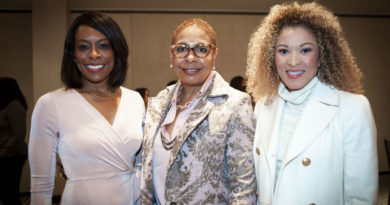