If participation numbers are any indication, then the high school athletic program at Alcuin School has hit the ground running.

Granted, it’s a small sample size, but eight of the 11 students in the school’s first freshman class are participating on the track and field team, with hopes of representing the Hawks at the TAPPS state meet this spring.

With the addition of a ninth-grade class this year, and students in grades 10 through 12 slated for each of the next three years, joining the Texas Association of Private and Parochial Schools was the logical next step, according to Alcuin athletic director Kay Herndon.

“TAPPS has a lot of variety in competitive activities,” Herndon said. “Along with all the sports we could want, they have things for all the students in the school.”

Alcuin has been competitive in a variety of sports at the middle-school level for the past eight years, including soccer, volleyball, basketball, tennis, and track. The Hawks are in a league with several other private schools in the Dallas area.

In addition to athletics, Alcuin also has joined TAPPS for such activities as speech, art, music, drama, and debate.

For now, the Hawks compete in the smallest enrollment classification in TAPPS. That should change in the next couple of years as the student body grows. Alcuin also doesn’t have a district affiliation yet, since it doesn’t offer any team sports.

Still, the Alcuin runners have already participated in several meets and will be eligible for regional and state competitions in May, with a chance to make history in the process.

“It gave us a chance to compete as individuals immediately,” said Andy Silverman, Alcuin assistant athletic director, about the decision to join TAPPS.

Herndon said Alcuin likely will add varsity teams in basketball, volleyball, and other sports depending upon interest. On the other end, the school also recently expanded its athletic program to the fifth and sixth-grade levels.

“They’ve been training several days a week,” Herndon said. “They’re ready to start competing. This will be a little bit of an introduction to high school athletics.” 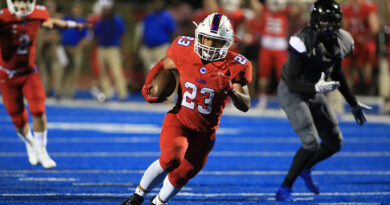 Parish Senior Might Be Small, But He Stands Out on the Field