IRVING – As opposed to Thursday’s game, which wasn’t decided until a walk-off single in the last inning, Highland Park’s bats were hot early on Friday, as the Scots cruised to a 5-1 win over Irving MacArthur to sweep their Class 6A Region II bi-district playoff series.

In the top of the first inning, William Adair lined a one-out triple to right-center field. Matthew White’s single up the middle scored Adair to give the Scots a quick 1-0 lead. Adair, who pitched a complete-game shutout in Highland Park’s 1-0 victory in the first game, went 4-for-4 and was a home run away from hitting for the cycle.

“He’s been solid all year, and he’s just a sophomore,” said HP head coach Travis Yoder. “He delivered [Thursday] on the hill and got it done at the plate tonight.”

The Scots (24-5) got another strong performance on the mound in Game 2 from Sawyer Lake. The junior scattered four hits over six innings while walking only one batter for the Cardinals (14-13).

“Sawyer has pitched well all year,” Yoder said. “He attacks the zone and throws strikes.”

HP’s Jon Skidmore led off the top of the third with a single up the middle. Adair’s infield single advanced Skidmore to second, and he reached third on a fielder’s choice. Skidmore, a Baylor signee, crossed the plate on Layne Looney’s groundout to short to give the Scots a 2-0 lead after three innings.

“We capitalized tonight when [Thursday] we didn’t as much,” Yoder said. “To keep advancing, we’ve got to capitalize on our opponent’s mistakes while we limit our own.”

Adair drilled a two-out double in the gap in the top of the fifth, and after an intentional walk to White, Looney recorded his second RBI of the game after his single to center scored Adair to give HP a 3-0 advantage. The Scots subsequently added runs in the sixth and seventh innings while yielding just one in the bottom of the sixth.

Looney, a University of Richmond signee, came on in relief in the bottom of the seventh and calmly struck out the side to preserve the win for HP. The Scots will play either Harker Heights or Sachse in the area round next week. 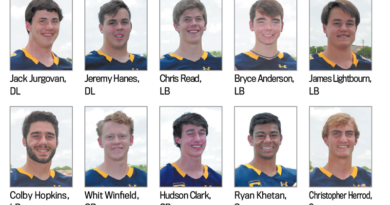 New HPHS Band Director Has Some Cleanin’ Up To Do

‘Color Me You’ Premiere