Jeremy Stewart had no idea that the friend he made on the St. Mark’s playground in fifth grade would eventually be one of his two business partners — and that his wife would be the other.

The unusual name traces back to Jeremy and Lila’s time abroad — specifically, the couple lived in Indonesia from 2007 to 2010, while Jeremy worked on a documentary and Lila volunteered at an orphanage.

Hari means “sun” in Indonesian, while mari means “sea” in Latin. Put the two together, and you’ve got a flip-flop company.

“In 2010, when we moved back, we were just shopping for flip-flops and couldn’t bring ourselves to buy the same brand that we’d been wearing for 15 years,” Lila said. “That’s kind of when the light went off.”

Once they decided to start the company — which officially launched in 2012 at St. Bernard Sports and online, the Stewarts were particular about what they wanted.

For one, Jeremy was tired of only seeing flip-flops for men in black and brown — he wanted more color.

And then there’s the issue of that annoying middle toe piece.

So, they developed a memory-foam center post that is patent-pending. In addition to that, the all-rubber outsoles provide strong traction in water, while the wave-pattern siping is designed to wick away excess moisture.

But Hari Maris aren’t just about comfort and style. One percent of all sales are donated through a partnering hospital to families dealing with pediatric cancer and struggling to pay their bills.

Though the company is young and very much small-town based, it’s already found quite a bit of success — Hari Maris have been featured in magazines such as Nylon Guys, Entrepreneur, and Garden and Gun. They’ve even been featured on the NBC morning show “Today.”

“That’s the coolest part, when you see somebody out in the wild wearing your product, and you think, ‘I made that,’” Veatch said.

It’s not bad for a flip-flop company in a landlocked city.

“We felt there was a huge disconnect between the way most of these flip-flop companies speak to their audiences and who their audiences actually are,” Jeremy said. “They’re speaking to everybody in terms of a surfer, a beach volleyball player, someone on a stand-up paddle board in the ocean, and that really doesn’t resonate with kids in Dallas.”

In addition to their presence in stores such as St. Bernard Sports, the Hari Mari crew is creating more of a storefront space in its Haskell Avenue warehouse.
“We know we’ve only scratched the surface,” Jeremy said. 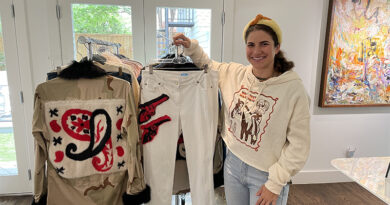