Maurine Dickey and her husband met and married while they were students at SMU. Before they graduated, they were running her father-in-law’s barbecue company after his unexpected death.

Now, with the company nearing 75 years in the barbecue business, Dickey decided it was time to focus on philanthropic pursuits. That’s why she’s founded Barbecue, Boots & Badges, an organization that gives back to families of fallen law enforcement officers and officers or departments in need.

“There are not a lot of organizations out there that help the police,” she said. “When police or law enforcement have a tragedy or death, the fellow officers pull money out of their own pockets.”

Founded just last fall, the organization received its 501(c)3 status rather quickly and got right to work.

As seems appropriate for the cause, Barbecue, Boots & Badges takes on projects on a case-by-case basis. Most recently, the nonprofit provided fresh flowers for fallen officers’ graves for a number of holidays at the Garden of Honor at Restland Funeral Home and Cemetery. Dallas police made the request on behalf of the families of the fallen officers, and a ceremony was held on Memorial Day.

“Considering what the widows have been through or endured, this was something where we all came together to acknowledge their loss to recognize what those officers meant to them and to us,” Sgt. Demetrick Pennie said. “That’s the overarching message, is that we still remember.”

But Barbecue, Boots & Badges isn’t just about Dallas law enforcement in need — it has already accepted other projects across the country. Dickey also attended the Police Week Honor Guard Competition in Washington, D.C. — where Dickey’s provided barbecue for the entire event — and also attended a memorial service for all fallen officers in the past year.

“It was really moving for me to see these people who came,” said Dickey, who spent eight years as a Dallas County commissioner.

The organization also held an event in Minneapolis to build partnerships and has provided hotel rooms near a hospital for family members of a wounded officer in California.
Right now, the organization is raising funds for projects through partnerships, private donors, and one other thing — potato chips.

“Last year, Dickey’s invented a potato chip,” she said. “Every store around the country has a rack of Dickey’s potato chips, and every bag sold goes to Barbecue, Boots & Badges.”

The chips come in three flavors: barbecue (obviously), jalapeno, and original. Diners can also donate by scanning the QR code found on each table in the company’s 508 restaurants nationwide.

The organization will continue to give in two ways: through grants and through an emergency fund. Families or law enforcement can apply for a grant depending on their needs or seek the organization’s help in emergencies. All of this effort boils down to the ultimate goal — to honor officers.

“We’re very appreciative of Mrs. Dickey’s philanthropy and even acknowledging that this is a significant issue,” Pennie said. “She asked to talk to us about what our officers needed. That was important to us and has opened up a door for us as officers.” 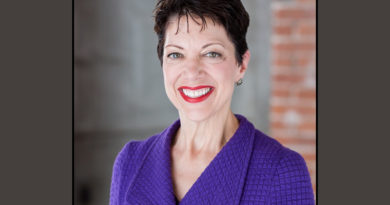 Temple Grandin to Speak at SMU