Something happened tonight that I’ve never seen before. You, the good people of the Park Cities, did not use all of your allotted time for public comments at a meeting.

Are you OK? Did you leave a roast on? Is there a sick child at home? A game on TV you wanted to watch? What’s going on?

In all seriousness, tonight’s meeting regarding the HPISD facilities bond package — which will be up for a vote on Nov. 3 — included about 30 minutes of overview and maybe 10 minutes of speakers. Let’s review.

The overview included much of the information you’ve probably heard before, if you’re paying close attention: removing the high school natatorium for classroom space, building a new elementary school, rebuilding Bradfield and Hyer elementary schools, etc. — all totaling about $361 million.

“We know this is a bold plan,” said facilities committee co-chair Gage Prichard. “Rebuilding Bradfield and Hyer is the most cost-efficient, long-term.”

By that he means interest rates are low, construction costs are likely to go up later, and demographers predict the existing schools will be at capacity within 10 years. Essentially, part of his argument was that not rebuilding now would only delay the cost and necessity of rebuilding later.

“Renovations would still only be a Band-Aid,” he said. He added that the rebuilds would “reflect the character of HPISD” and that the district is “well-positioned to take on this level of debt” due to its AAA credit rating.

As many know, a purchase agreement has already been signed with Northway Christian Church for land that would eventually house a new elementary school. That agreement is contingent on the bond, though.

One interesting note: due to homestead exemptions, taxpayers aged 65 and up would not see any school-tax hike — their percentages are locked in.

But attendees still had a few comments to make.

“I would encourage everyone in this room to vote for this bond,” University Park resident Russell Fish said. “This is just a down payment on what’s to come … these changes are coming to the Park Cities and HPISD.”

Fish brought up the patch of land within HPISD that is technically in Dallas city limits. He pointed out that Dallas is HUD-subsidized, meaning the city is bound by the government to provide fair housing to residents as an effort, in part, to make quality education achievable for all students.

“With these overlapping boundaries, we’ll see the first of these new, diverse changes,” he said. “Without this bond, these students will have nowhere to go.”

“We’re still paying off outstanding principal,” he said. “Is it possible to refinance our existing bond obligations?”

Do you have a comment for the committee you’d like to make? There’s another meeting at 7 p.m. at the Highland Park High School auditorium on Thursday. If you can’t make either meeting but still want to comment, do so online here. 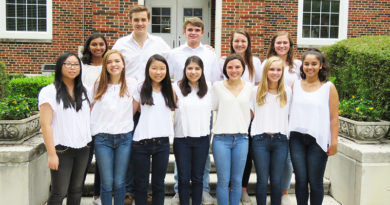 One thought on “Few Speakers at HPISD Facility Meeting”