Skulduggery of the week: Two Feet Under

At 2:48 p.m. on July 20, a reckless driver in a white Nissan Versa ran over the feet of a pedestrian while speeding backward through the parking lot of Whole Foods Market in the 4100 block of Lomo Alto Drive. After the collision, the victim slapped the car to get the perpetrator’s attention. Then the driver got out of the car to ask whether the shopper was injured, to which he replied that his feet hurt. However, the miscreant refused to give his information to the hobbled man, then fled the scene while the pedestrian went inside the store to ask if there was an off-duty police officer there. The Versa is registered to an 84-year-old Dallas man who might have been in the passenger seat.

20 MONDAY
Between 4 p.m. on July 17 and 7 a.m. on July 20, a thief stole a bag of tools from inside a locked metal box at a residential construction site in the 3600 block of Lexington Avenue.

21 TUESDAY
At 4:04 p.m., a group of teenagers kicked and punched the passenger side of a black 2009 Audi sedan in the 5400 block of Hillcrest Avenue as it waited for a light to turn on to Mockingbird Lane. Police stopped the vandals near the intersection of Hillcrest and Beverly Drive, where they were met by a counselor for Creative Solutions, a group that helps at-risk teens and was operating a summer arts camp at SMU. The 8-10 campers, who are all black, were walking to catch a bus after the camp when they claimed a driver yelled racial slurs and spat at them. Police said they retaliated by attacking the Audi, perhaps by accident. None of the kids admitted to damaging the car, and camp counselors took them home. The damage to the Audi included smudge marks and a small dent.

22 WEDNESDAY
At 3:28 a.m., a thief stole a $325 porcelain Chinese sitting stool from a front porch in the 4200 block of Belclaire Avenue. The incident followed the theft of an identical stool from the same porch on July 15.

23 THURSDAY
At 10:25 a.m., a resident of the 4300 block of Fairfax Avenuearrived home and saw a silver 2015 Hyundai Sonata with Louisiana license plates in the driveway. A man in the backyard claimed to be a painting contractor, but he was lying, and later fled to the Sonata along with two accomplices carrying merchandise stolen from the house. They dropped some items during the getaway, but managed to pilfer $6,250 worth of jewelry, a $300 lockbox containing $1,000 in cash, and a $400 Visio flat-screen television. The car was traced to a rental agency, and had been loaned to a Garland man with an extensive criminal history.

26 SUNDAY
At 3:36 a.m., Corey Swan, 23, of University Park was arrested in the 4800 block of Preston Road on two drug possession charges and a charge of pedestrian in the roadway.

21 TUESDAY
At 1:55 p.m., a thief stole a $500 iPhone, a purse, and assorted clothing from a white 2008 Toyota SUV while it was refueling at the Chevron station at The Plaza at Preston Center. 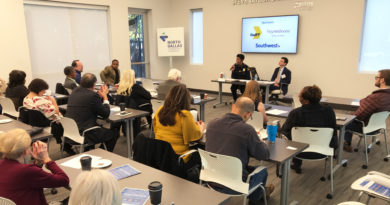