Laci Rosen’s advice is meant to apply to her team of aspiring young inventors, but it could easily serve all walks of life.

“When you’re cutting wires, only cut one at a time or else it’s really hard,” said Laci, a fourth-grader at Hyer Elementary School. “You have to have a lot of teamwork.”

Laci’s quartet in the Camp Invention summer program was busy trying to figure out its latest challenge — how to disassemble a common household electronic device and use its components to create a prototype for a maze-inspired video game.

“We’re using circuit boards and wires to create a game,” said Sean Markey, a fourth-grader at Armstrong Elementary who was dismantling an old computer console. “I like reverse engineering — taking apart the machines. I’ve always wanted to invent or create something.”

The weeklong class, which gets its curriculum and supplies from a company in Ohio, was introduced for the first time this year as part of the Academy for Lifelong Learning in Highland Park ISD. It allowed 33 children in first through fifth grades to find new uses for recycled items, such as makeshift go-carts designed to navigate a water-balloon obstacle course.

“They take items and do things that they weren’t originally made to do to accomplish some goal,” said Joan Webb, a science teacher at Armstrong who oversees the program. “It allows kids to actualize things that are in their head. They also learn the science behind those prototypes.”

At the end of the week, there’s a showcase for parents where both groups and individuals present their projects. Plus, the students hear taped inspirational messages from real-life inventors in such areas as space exploration, architecture, and aquatics.

Individual creations must be designed to meet a need. There’s even a miniature “Shark Tank” component. For their individual inventions, the hopefuls apply for fictional patents for their ideas then take them to a market for potential investors.

“All ages and all levels can benefit from it,” said Armstrong teacher Annaly Pino. “It’s amazing the creativity that they can put into it.”

For some students, the creativity they put into their projects is a natural extension of what they already do with paper or Legos at home.

“I’ve been building things at my house for a long time,” said Finn Wallingford, a fourth-grader at Bradfield Elementary who built a cardboard prototype of an airborne military bunker with a rocket launcher. “If I see a cardboard box, I just rip it up and make something with it. I’ve always liked finding out how things work.” 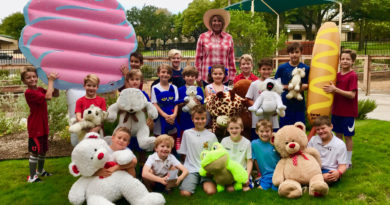 ‘Deep in the Heart of Hyer’ Scheduled for Oct. 12