Halfway through another year of frantic activity in the local housing market, there are few signs that supply will catch up to demand.

Sellers have seen plenty of happy returns in the Park Cities and Preston Hollow during the spring and early summer months, following a trend that has been ongoing as more buyers look to move into the area.

“It’s a great market,” said Lindy Mahoney, an agent with Briggs Freeman Sotheby’s International Realty. “If you’ve got them priced right, and they’re in a great location, they’re selling.”

According to statistics from the North Texas Real Estate Information System, inventory among single-family homes increased in the Park Cities during the second quarter of the year, while prices dipped slightly. But while the number of active listings is up sharply, so is the number of closed sales.

For example, there were 88 houses sold in the Park Cities in June, compared to 67 in March, all while prices continue to hover above $350 per square foot.

The numbers are similar in Preston Hollow, where sales and prices have risen in tandem. The 90 sales closed in June were for an average of almost $900,000, compared to 78 deals finalized in March at an average of less than $700,000.

Mahoney said sales of higher-end properties tend to slow down during the summer while their owners are on vacation. However, those in medium price ranges are active with buyers wanting to move in before school starts.

“Anything up to about $3 million is flying off the market,” she said.

Meanwhile, sales of condominiums and townhomes also are fetching big bucks. The median price for such a sale in Preston Hollow so far this year is $387,000. 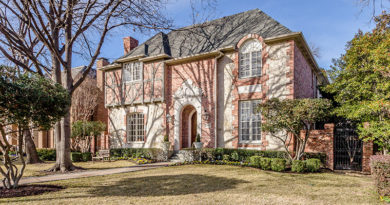 House of the Month: 3120 Purdue Avenue

How Many Houses Are Being Built in Highland Park?