Former University Park mayor Joel Williams Jr., whose son is the current mayor of Highland Park, died this week of pneumonia at age 94.

Williams served as UP mayor for one term beginning in 1982. It was part of a legacy of civic involvement that included a longtime spot on the State Fair of Texas executive board, as well as stints on the Dallas Park Board and boards for the Dallas Arboretum and the Salvation Army. He served on the UP board of commissioners for six years prior to becoming mayor.

Williams also was a founding member of Park Cities Presbyterian Church, where a memorial is scheduled for 11 a.m. Friday.

He graduated from Woodrow Wilson High School in Dallas, then attended Baylor University and SMU, where he received a law degree. He also served in the Navy during World War II. Williams later carved out a successful career as a bank executive in Dallas.

He passed on his affinity for community service to his son, Joel Williams III, who has been mayor of Highland Park since 2012. His stepdaughter, Linda Perryman Evans, is president and CEO of the Meadows Foundation.

Easter Bunny Comes to UP For Eggstravaganza 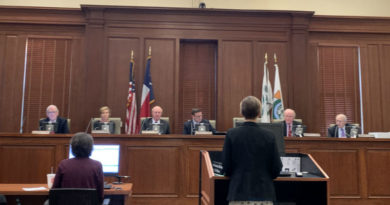