ADDISON — Let’s tip our caps to the football team at Thomas Jefferson, which opened the season with a 26-6 victory over Fort Worth North Side on Thursday at Loos Stadium.

That might sound like a modest accomplishment, but it’s a little more significant for the Patriots, which haven’t won a season opener in more than a decade. In fact, TJ hasn’t had a winning record at any point in any season since 2002.

It’s true that the victory came against a school with a similar streak of futility in recent years, but the Patriots hope it could provide the confidence to launch a resurgence.

It provided the first career win for new head coach Philip Murray, a former Lovejoy assistant who has spent the offseason trying to instill a more positive mentality both on and off the field.

“Culture is the big thing we’re trying to move forward with. Culture beats talent all the time,” Murray said. “We’re trying to put in a lot of policies and programs where values are important, and start rewarding people who are doing the right things. If we haven’t changed how they approach the game, then there’s no opportunity to get better on the field.”

The Patriots return a few talented skill players from last season’s 2-8 team, including Kendrick Bright, who ran for two touchdowns — including a pivotal 86-yard scamper in the third quarter — and threw for another touchdown against the Steers.

Bright tallied 166 yards rushing to lead an offensive that accumulated 410 total yards, which more than doubles the output from nine of the team’s 10 games last season.

Among the other individual standouts, Jareel Johnson intercepted two passes for the Patriots, and Kendall Jackson caught a scoring pass and recovered a fumble.

The effort gave Murray a sense of cautious optimism, although he acknowledges there’s still plenty of room for improvement before the start of District 11-5A play in a few weeks.

“We’re going to try and take it slow and steady,” Murray said. “We see our potential, and we’ve got to focus on the small things to capture that potential.” 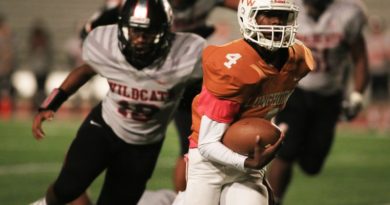 Wildcats Pull Away From Longhorns