Parish Episcopal scored on its first five possessions against TAPPS district foe Coram Deo on the way to a convincing 46-7 win on Friday at Gloria Snyder Stadium.

The Panthers (4-0) were paced by Dominic Williams’ 245 yards of total offense and three touchdowns as they scored early and often against the visiting Lions (2-2).

Williams scored on a 2-yard run with 8:28 left in the first quarter to begin the onslaught. The most electrifying play came with seven seconds left before halftime when he juked and spun on his way to a 93-yard touchdown run to give Parish a commanding 43-0 lead at intermission.

“Dominic is a special athlete,” said Parish head coach Scott Nady. “He’s just a junior, and at any time he can take one to the house.”

Leading 7-0 with just under two minutes left in the first quarter, Parish quarterback Jeremy Hodge, also a junior, connected with Ty Bennett from 6 yards out to put the Panthers up by two scores.

Bennett was on the receiving end of two more Hodge touchdown passes on the next two Parish possessions to put his team up 29-0 midway through the second quarter.

“We have a great connection, both on and off the field,” said Bennett. “The first score was a short stop route, and the next two were fade patterns.”

Bennett caught four passes on the night for 63 yards, converting three of his receptions into scores.

“He’s a diamond in the rough,” Nady said of Bennett. “He was strictly basketball until a few years ago, and we’re lucky to have him on this football team.”

Hodge had an impressive night, finishing with 246 yards passing and four touchdowns while rushing for 31 yards on just two carries.

“We had a big lead at halftime,” Hodge said. “In the locker room, Coach Nady said just keep playing hard in the second half, and good things will continue to happen.”

The Panthers slowed their offense down in the second half, even opting to kick a field goal on first down from the 7-yard line. Preston Harless’ 27-yarder was good to put Parish up 46-0 early in the third quarter.

“We coach to play with class,” said Nady. “We always play with 100 percent effort, but we’re not out here to demoralize anyone.”

The Lions prevented the shutout when Ryan Rogers connected with Blake Hathaway for a 4-yard touchdown pass with just under six minutes left in the game. 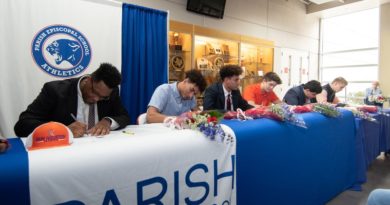