ADDISON — Injury issues and a lack of execution doomed Trinity Christian during a 40-0 loss to previously winless Fort Worth Nolan on Friday at Tom Landry Stadium.

It was a rematch of a TAPPS state championship game from 2012, but both teams are struggling this year. The Trojans (1-5) were shut out for the first time since early in the 2010 season.

Leading 3-0 early in the second quarter, the Vikings (1-5) drove the length of the field and scored on a 1-yard run by Jacob Walden to go ahead 10-0.

After an interception at the TCA 30-yard line, Nolan capitalized on the good field position when Brenden Farley rushed for a 5-yard score to put Nolan on top 17-0 with 9:51 to go before halftime.

“We can place the blame on a number of different things,” Howard said. “Fortunately this is just our third district game and we still have a fighting chance to make the playoffs.”

Nolan went up 24-0 just before intermission after Walden found Michael Chiffolo alone in the end zone from 9 yards out.

Trojan quarterback Sam Clare, a converted wide receiver forced into action because of a season-ending injury to starter Blake Hinton, was on the run all night.

“They blitzed pretty the whole game,” said Clare, a sophomore. “I know the score might not show it, but I’m learning as I go and having fun.”

Nolan took advantage of two Trojan turnovers in the fourth quarter, the first coming on a Clare interception deep in TCA territory.

At the 10:57 mark of the final quarter, Walden connected with Adam Moore for a 35-yard touchdown pass to put the Vikings up 33-0. After another interception, Nolan scored once more after Rory Mitchell scampered in from the 8-yard line.

Cody Henson rushed for 43 yards for the Trojans on nine carries, and Jack Savage caught five passes for 22 yards in the losing effort.

“We still have plenty to fight for with key district games coming up,” Howard said. “Yes, we are battling the injury bug, but we will not dwell on that and continue to play for a spot in the playoffs.” 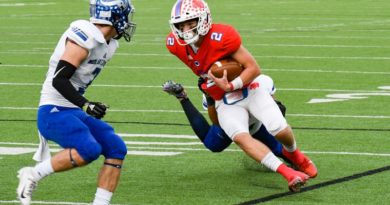