Wade Cottingham and Robert Rothbard finally got the band back together, even though they’re separated by several hundred miles.

The Rothbard Cottingham Bandwagon marks a reunion of sorts for the two former bandmates at Highland Park High School during the 1970s, allowing them to find a new sound more than 30 years after they last jammed with one another.

In high school, Cottingham played the clarinet and piano while Rothbard was a percussionist. They continued their partnership at Austin College, where they did a few cassette recordings as part of a jazz quintet.

However, both retained their love of music and the arts. Cottingham was a part-time musician and computer programmer, then became a full-time, self-employed music teacher at Lakewood Piano Lab in 2002. Rothbard was involved in a construction business and later moved to Missouri.

In 2010, Rothbard reached out via email, asking if Cottingham would contribute some music to a series of art videos he was making. That collaboration went well, so Cottingham suggested they collaborate again — this time perhaps trying an album.

“I don’t know what sparked it. I always enjoyed playing with him,” Rothbard said. “We both had different journeys, but we’re on the same path.”

Through the wonders of technology, they worked together for three months this spring via SoundCloud — with Rothbard on percussion and Cottingham adding instrumentals — on several tracks that produced a unique jazz-pop sound.

“Neither one of us had made an album for release before,” Cottingham said. “He’s very easy to work with.”

While it might lack the polish of a traditional studio work, the 45-minute album is available online. However, sales aren’t the top priority for the two band members. And there won’t be any reunion tour, since Rothbard has a condition known as spastic paraplegia that limits his mobility.

“I want to play as much as I can at this point, because I don’t know how much longer I’m going to be able to,” Rothbard said. “That’s what makes it fun. It’s not work.”

They’re already talking about the next album, which will feature an electronic sound heavy on synthesizers.

“This is not for money,” Cottingham said. “I feel very powerful in a collaboration. I want to do five or six more even if we don’t make a dime.”

Get Your Tickets To PHPC’s The Wizard of Oz 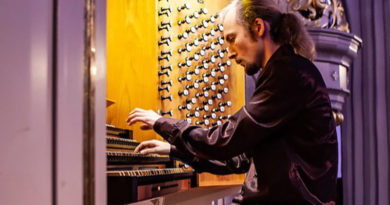 Upcoming Events at SMU’s Meadows School of the Arts