An efficient offense and an opportunistic defense earned ESD a repeat trip to the SPC championship game.

The Eagles soared past Arlington Oakridge 56-21 on Saturday at Jones Family Stadium, giving ESD a chance to defend its SPC small-school title against Fort Worth All Saints at noon Saturday in Round Rock.

Nakeie Montgomery led the offense with five touchdowns, giving him 28 for the season. And the defense picked off four passes, setting a new school record for interceptions in a season with nine.

“It’s the first time we’ve been tested with a passing quarterback like that all season,” said ESD head coach Richard Williams. “The defense really stepped up. You can’t ask for anything more.”

The ESD offense made things look relatively easy, considering the Eagles (9-1) had to overcome 120 penalty yards and four turnovers — two of which came in the first five minutes.

In fact, the Owls (8-3) took an early advantage on a 34-yard interception return by Gordon Fleming. But ESD rallied behind Montgomery.

“We started off pretty slow, but we were resilient. We just kept fighting hard,” Montgomery said. “We bend, but we don’t break.”

The junior caught a 22-yard touchdown pass from Seth Washington to tie the game late in the first quarter. He put the Eagles in front with a 2-yard scoring plunge, and added a 42-yard scoring catch in the second quarter.

Montgomery also scored on a 27-yard run to open the second half, and a 47-yard run early in the fourth quarter to help put the game out of reach. Montgomery rushed 18 times for 151 yards and added four catches for 97 yards.

“When he gets his hands on the ball, he’s hard to tackle,” Williams said. “He’s just a real asset in all phases of the game.”

Washington connected on just eight of 20 throws (with three interceptions), but he averaged 24 yards per completion with three touchdowns, including a 45-yarder to Cameron Pike just before halftime.

Meanwhile, the ESD defense forced five turnovers, including four interceptions, one of which was returned for a touchdown by Blake Morrison late in the third quarter.

High-scoring Oakridge managed just one offensive touchdown on an 8-yard scamper by Campbell Garrett, who completed 21 of 43 passes.

The Eagles almost scored on a second interception, but Eli Dressler’s return was nullified by a penalty in the final minute of the first half. Patrick Skalniak and Conner Bolton also picked off passes.

Other games this weekend:

The Lions (6-4) couldn’t overcome a big first-half deficit as St. Mark’s fell in the SPC large-school semifinals for the second straight year. Michael Goldak and Johnathon Thomas pushed the Falcons (7-3) to a 33-7 lead before halftime. Matthew Placide threw four touchdown passes for St. Mark’s, which had its four-game winning streak snapped.

The Rangers (8-1, 6-0) clinched a share of the District 9-6A title with another stellar defensive effort, forcing four turnovers against the high-powered Cardinals (5-4, 4-2). Meanwhile, Jacob Palisch tossed three touchdown passes and ran for two more scores as Jesuit won its seventh straight game. Max Loughborough scored twice for the Rangers.

The Longhorns (4-5, 2-4) suffered their third straight loss in heartbreaking fashion to end their playoff hopes, when the Vikings (6-3, 4-2) scored on a blocked field-goal return in the fourth quarter. Jackson Fults scored two rushing touchdowns and threw for another for WTW. Mark Eugene rushed for 200 yards and four scores for Nimitz. 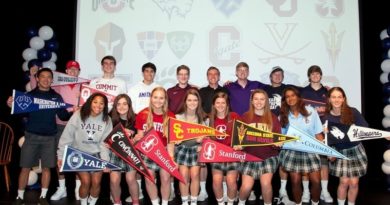