Highland Park ISD voters on Tuesday gave the OK for their school district’s facilities to be transformed over the next decade in the face of unprecedented enrollment growth.

Amid very high turnout, Park Cities residents approved the district’s $361.4 million bond proposal by a margin of 54.75 percent to 45.25 percent. There were more than 8,000 votes cast, with a late surge of opposition on election day closing the gap.

It’s the most ambitious bond package in HPISD history by a wide margin, with the most prominent component being the addition of a fifth elementary school, along with the razing and rebuilding of three of the four existing elementary campuses, each of which is at least 65 years old.

While critics said the proposal lacked fiscal responsibility, transparency, and historical compassion, supporters claimed it would give HPISD the space it needs to permanently accommodate all of its students and educational programs without the need for quick fixes.

“I am grateful to the voters in HPISD for the historic decision they made in this election,” HPISD board president Joe Taylor said in a statement. “For 101 years, HPISD has had a proud tradition of excellence in its schools. Tonight, voters overwhelmingly chose to build on that foundation of success for the next 100 years. This bond election isn’t just an investment in Highland Park ISD; it is an investment in the future of the Park Cities.”

At the elementary level, the fifth campus will be constructed first on 4.6 acres the district will purchase from Northway Christian Church. The district said late Tuesday that work could begin as soon as next spring, and the building could open in fall 2017.

It will be used as a relief school while Bradfield, Hyer, and University Park elementary schools are torn down, one by one, and rebuilt over a three-year period. Then the fifth campus would debut with its own student body thanks to redrawn attendance zones. The new and rebuilt schools all will have two stories and underground parking.

“The real work now begins,” said HPISD superintendent Tom Trigg. “As an administration, we are committed to allocating bond funds wisely and judiciously in implementing the goals of this bond program. Our goal is to continue to make this community exceedingly proud of its schools.”

The high school will see additional classrooms from an addition on the northwest corner of the building, as well as from tearing out the school’s natatorium. Other space accommodations also are part of the plan. The Seay Tennis Center will be moved behind the parking garage to make room for a new multi-sport complex that will house offices and locker rooms for several sports, athletics administration, and meeting rooms, and a new natatorium. A handful of updates for Highlander Stadium also are on tap.

Financially, the bond referendum will likely add more than $1,000 per year to the tax bill for a $1 million home, depending on when the debt is issued and how it’s structured. That would land somewhere around $1.25 per $100 of assessed property value. The term would likely be 20-30 years.

So now that the talk will turn into action, we’ll begin to hear more about implementation timelines, construction plans, and public input on building designs in the coming weeks.

But in the meantime, now that the election is over, what do you think should be the top priorities for HPISD moving forward?

Hyer Fourth-Graders Help Their Own Future 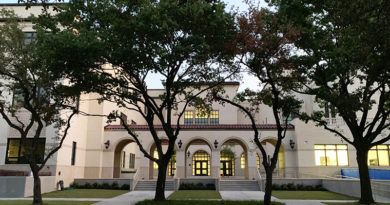 New Bradfield Leaves Cramped Hallways in the Past

7 thoughts on “HPISD Looks to Future With Bond Approval”