These questions remind former Dallas Cowboys defensive lineman Charles Haley, “Who I am today determines how I’m going to be remembered tomorrow.”

But for all of his toughness on the field, the five-time Super Bowl winner harbored an internal vulnerability because of his struggles with bipolar disorder.

Haley never experimented with drugs or alcohol during high school. And in college, his paranoia kept him from succumbing to the party scene. He was out of control, and even hurt other guys on the team.

“I was always afraid if I got drunk or high or something that they would take advantage of me and beat me up for something,” Haley told a room of 500 people at 31st annual CARE breakfast at the Frontiers of Flight Museum.

Haley never felt like he fit in, making him guarded. He said he was always in attack mode, making it difficult for him to gain friends.

People would refer to him as Dr. Jekyll and Mr. Hyde. There were days he would walk into the locker room bouncing off the walls, followed by days he would walk in and wouldn’t say anything. Haley admitted he had difficulty accepting he might have had an emotional problem.

“The best thing I’ve done was when I went to a treatment center,” said Haley, who lives in Preston Hollow. “That was the best center I ever went to because I knew everything about alcoholism and drug addiction, but I didn’t have the tools to deal with being bipolar.”

It wasn’t until his daughter, Brianna, was diagnosed with leukemia that Haley turned to drugs and alcohol for comfort.

“I couldn’t deal with the emotional side,” Haley said. “All I could think was that she’s going to die, so I started to do cocaine and started drinking a lot. That’s not a good recipe.”

Haley recalled how he would explode at his kids. He would shut himself away in his room with bottles of alcohol, and his children would leave food at his door. Finally, his wife sent him away when he said he wanted to hurt himself.

“I thought I could stop, so I didn’t get help,” Haley recalled. “Everything changed when I was honest with myself.”

Things started to get better after Haley changed psychiatrists. He tried to explain to his previous psychiatrist the prescription he had was making him sleepy and gain weight. He felt she wasn’t listening, and he stopped taking the medication.

Haley switched to a different psychiatrist who listened and put him on the right medicine, allowing him to travel and reach out to other players with similar issues.

In January, Haley was inducted into the Pro Football Hall of Fame. His career was spent between the San Francisco 49ers and the Cowboys, earning Super Bowl titles for each team.

Now Haley focuses his efforts on Tackle Tomorrow, an organization he co-founded with Bob Bowie. Through this group, Haley motivates kids to understand the importance of education, and help kids who struggle with reading and writing. Tackle Tomorrow provides computers, installs education software, and funds instructors for after school programs in Dallas County.

Before the CARE breakfast, Haley huddled with high school football players from different Dallas schools to give a pep talk with an important message.

“It’s about being leaders,” Haley told them. “You have a team. You don’t have to walk in and try to make friends. … Most kids, the reason they try to do drugs is they want to fit in. It’s just a social problem.” 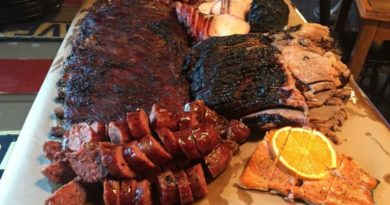