There doesn’t seem to be a dull moment when Mark Schor and Michael Eisenberg are together. The Dallas natives have a long history together, dating back to their teenage years at Hillcrest High School.

They weren’t just friends. They were family. And it was evident while they reminisced on a tradition they’d started just over 50 years ago — the Christmas Day Classic, as they call it. What’s their favorite part?

“The end of the game,” Eisenberg said, as the pair burst into laughter.

It all started in 1964. There was a group of boys who all went to Hillcrest and had a love for sports, especially football. They were a part of the same youth group. And they were all Jewish.

On Christmas Day, while the majority of their counterparts would be celebrating with loved ones, they had a free day. So the boys took matters into their own hands.

“Well, we really didn’t celebrate Christmas, being Jewish, but we wanted something to do,” Schor said. “It was a day off for us and a special day in the country, of course. So we said, well, let’s play football Christmas morning!”

And they did. Sixteen boys took the field at the Jewish Community Center of Dallas on Dec. 25 for a little 7-on-7 game of tackle football. It became a highly anticipated diversion each holiday season, and the beginning of their own Christmas tradition.

Even still today, as those “boys” are now 60-something-year-old men, the 51st Christmas Day Classic game is just around the corner. And yes, they will be playing.

“People have asked us if we are still going to play, and the answer is, of course we are,” Schor said. “As long as we’re alive and well enough to do it. Plus our children are counting on the tradition.”

Much has changed since that first game. To start, they traded in tackle football for touch football, much to Eisenberg’s approval. The Classic’s starting 16 are now joined on the field by their spouses, sons, daughters, and friends.

Eisenberg has two daughters. They don’t play, but they are always present on the sidelines. Schor has three boys. Two of them fly in from California every year for the game. Schor said that no matter where life takes them, they know that Dallas is the place to be on Christmas Day.

“It’s very meaningful as a father to know that your children think enough of what their parents do to continue this tradition,” Schor said.

On Christmas Eve, they have a party with everyone, something like a family reunion. Everyone may not make it into town each year, but there’s always a great turnout. Schor’s wife, Ruth, is from Israel and makes a delicious falafel dinner for everyone. Schor may argue that the party is the highlight of the event.

Last year’s celebration, however, was one for the books. For their 50th year, a documentary was made, showing the evolution of the Classic over the years. It played in the historic Texas Theatre in Oak Cliff last Christmas Eve, taking the place of their traditional party. The game had a turnout of about 100 people, including family, friends and media members.

“Ultimately it’s about being together, giving each other hugs, and knowing that we have these deep connections to each other that will never go away,” Schor said. “We’re more than friends. We’re family.” 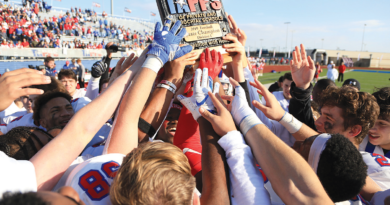