Jim Strode’s new property is one of the most talked-about sites in the Park Cities, although not always for the right reasons.

Strode recently closed on a purchase of the old Chase Bank office tower on Hillcrest Avenue. It has sat dormant for years amid failed attempts at redevelopment by its former owner, Park Cities businessman Albert Huddleston, who had previously resisted opportunities to sell it.

Now, Strode hopes to transform the eyesore with an eye-catching new look.

“We’re just hoping to make a clean break,” said Strode, the president of Dallas-based Strode Property Company. “I’m not going to look back. We’re going to take our ideas to the city and get something done.”

2006 Legacy Hillcrest is granted city approval by the city for a development about 60 percent of the size of the group’s original proposal, but nothing happened.

2011 The developer proposes to build a multistory parking garage on the site, but the city’s board of adjustment says no. The city won a related lawsuit on appeal in 2014.

2013 After several years in the building, the University Park Public Library moves to a permanent space near Preston Center.

Strode wouldn’t reveal specifics other than saying he hopes to bring a mixed-use development to the 2-acre property, which currently includes an adjacent parking lot and three small multifamily developments on the west side of the same block.

“We’re just going to do what feels right for the location,” Strode said. “Many people have tried, and we just happened to be there when he decided to sell it.”

Terms of the deal weren’t disclosed. Huddleston declined to comment through Bob Myers, the broker who represented him in the sale.

One significant feature of the property is that it’s the only tract zoned specifically for offices uses in University Park.

“That building occupies a prominent piece of land in the city,” said UP city manager Robbie Corder. “Its redevelopment does represent an opportunity. It’s a challenge, but I think it’s also a unique position.”

Strode’s general concept is a mixed-use project with ground-floor retail and some office uses. It likely would adhere to current zoning except possibly for minor variances (the current building is four stories). He also would like to have underground parking that could help relieve overcrowding at Snider Plaza.

How that will differ from previous attempts to redevelop the land are unclear. Huddleston’s Legacy Hillcrest Investments group met with resistance from city officials and neighbors each time he presented a mixed-use plan with office and retail uses along with condominiums. Traffic and density were the primary concerns.

The first attempt came in 2001, shortly after he bought the property, when the UP Planning and Zoning Commission rejected the scale of Huddleston’s first proposal.

A handful of subsequent appearances in front of the commission yielded the same result.

In 2006, Legacy Hillcrest was given a preliminary go-ahead as long as its plans were scaled back from 217,500 to 135,000 square feet, but Huddleston’s group refused. At one point, he proposed a plan that included a permanent space for the University Park Public Library.

More recently, Legacy Hillcrest approached the city about building a multistory, above-ground parking garage on the site, but after that plan was endorsed by the city’s community development staff, it was turned away by UP’s board of adjustment. That prompted a lawsuit that was initially decided in favor of Legacy Hillcrest before the city won an appeal last December.

Now the former bank building sits empty. Strode said he plans to meet with city officials and local residents in the coming months to come up with a plan that complements both the residential character of the neighborhood and the retail fabric along the street.

“I think it fits more with the retail there at Snider Plaza,” Strode said. “It’s such a great location.” 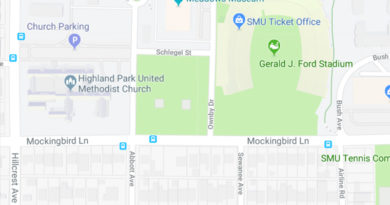 Traffic Update: Portions of Mockingbird Reduced to One Lane

What Should We Call The Chase Bank Building?

One thought on “Hope on Hillcrest”