While Highland Park seems to be in midseason form, St. Mark’s appears to be playing catch-up following a slow start.

The Scots used a first-half surge to pull away from the Lions 80-54 on Friday for their eighth straight victory.

HP continued the momentum it gained while winning a tournament in Burkburnett last weekend. The Scots haven’t lost since the week prior to Thanksgiving.

“The tournament was really good for us. We played really well there, and it carried over to this week,” said HP head coach David Piehler. “I’m pleased with where we are right now.”

After a seesaw beginning, HP surged ahead thanks to some hot shooting from Will Enzor, who scored 10 of his game-high 21 points in the first quarter.

The Scots (10-3) used a 7-0 run just before halftime to extend the margin to 43-26, and pulled away steadily after that, with a combination of solid transition play and timely shooting.

A 3-pointer by Enzor from the wing late in the third quarter made it 64-40, allowing HP to clear the bench. Twelve players scored for the Scots, including 16 points from Stefon Jauregui and nine from Ethan Nussbaum.

“We’re more balanced. We have four or five guys who’ve been hitting, and when we’re making shots like that, we’re tough to beat,” Piehler said. “We definitely wanted to push the pace, and a lot of that was from our defense.”

Meanwhile, St. Mark’s struggled with turnovers in its half-court offense. Matthew Placide and Will Ingram scored 10 points apiece to pace the Lions (6-6). However, Placide’s points were all bunched in the second quarter, and Ingram fouled out early in the fourth.

“We’ve finally got everybody back and healthy, but we’re still very young in our process,” said St. Mark’s head coach Greg Guiler. “We know we have a long way to go.”

Both teams will return to action at the Allen Holiday Invitational tournament on Dec. 28. HP will meet Frisco Heritage in the opening round at 2:30 p.m., while St. Mark’s will face Richardson Berkner at 5:30 p.m. The 16-team event continues through Dec. 30. 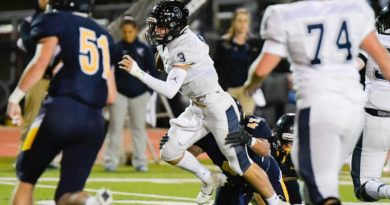