But style wasn’t the only thing presented at the event. ESD fifth grader Luke Lange was honored as the 2016 Spirit of Tom Landry Character Award recipient. While battling a rare type of lymphoma in the third grade, Lange wasn’t fond of the hospital gowns he wore during chemo treatments. So he designed a shirt that would allow easier access during treatment, helping lift his spirits. After a chance meeting with Mark Cuban, who loved the shirts, Luke’s Fast Break shirts were produced and distributed to fellow cancer patients.

The Fire & Ice fashion show portion of the event featured several spring collections from various shops at Highland Park Village, such as Carolina Herrera, Hadleigh’s, and Alice and Olivia. 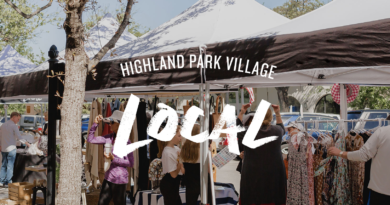 HPV To Host Last LOCAL Market of the Season

Get in Christmas Spirit at HP Village