The Highland Park ISD Board of Trustees got to take a closer look at what district architect Stantec has in mind for the new fifth elementary at last week’s meeting.

“We’re creating a new standard for the other schools,” said Jonathan Aldis, of Stantec. “To me it’s the realization of a lot of work and community feedback.”

The school will likely be segmented in three zones. Classrooms will sit at the south end; the administration offices and library will be in the center; and the general use spaces (gym, art rooms, parking garage, cafeteria, etc.) will sit at the north end.

The main entrance will be at the center zone. You can see more images here.

“We’re trying to satisfy this elusive comment, that it needs to look like it belongs in the Park Cities,” Aldis said. “What we’re showing here is the most conservative view.”

To accommodate the slope of the property, the zones will be broken into different stories — three on the south end and two on the north — connected on the ground level by sloped hallways.

This will also address community concerns about not singling out students who can’t use stairs, Aldis said, especially at the lower grades.

“We’re designing this from the inside out,” he said.

Classrooms are expected to be in pods, with seven rooms around a central, shared learning space to allow for both small and big group lessons. Aldis said the conversations happening now concerned where the teachable wall space would be.

The emphasis on flexible learning space extends to the outdoors, with plans for a garden and possible amphitheater on the west side of school in the center zone.

“This will be central to the identity of the new schools,” Aldis said.

According to Masterplan’s suggestions, traffic will be routed around the building to the north along Northwest Parkway, and then south along Durham Street toward the center of the school for drop off and pick up. There are plans to have a covered area at the entrance for bad weather and shade.

A delivery and garage entrance to the property would be added off of the parkway to allow that traffic to not interfere with the carpool line and decrease neighborhood cross through.

“We’re making every effort to be the best neighbors we can, acknowledging we’re bringing more traffic,” Aldis said.

The designers are planning on using a red brick mix at the moment, Aldis said, as focus groups didn’t respond well to a blonde brick like what’s used at Bradfield and University Park elementary schools.

“The aesthetic of the exterior of the school is something that we are committed to getting right,” said Facilities Committee chair Jim Hitzelberger. “We know how much pride this community has in the look and feel of its schools and we are continuing to refine what we already have.”

Hitzelberger stressed that ensuring the new school has architectural integrity is important to the board. “That’s why we keep saying we’re close,” he said.

Swing by the MIS 5/6 Assembly Room on March 15 at 5:30 p.m. for the next board meeting to hear more about how the conversation has progressed. 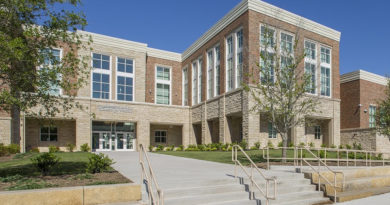 HPISD Puts Community in the Room With Developers

2 thoughts on “Board Gets First Look at Fifth School”