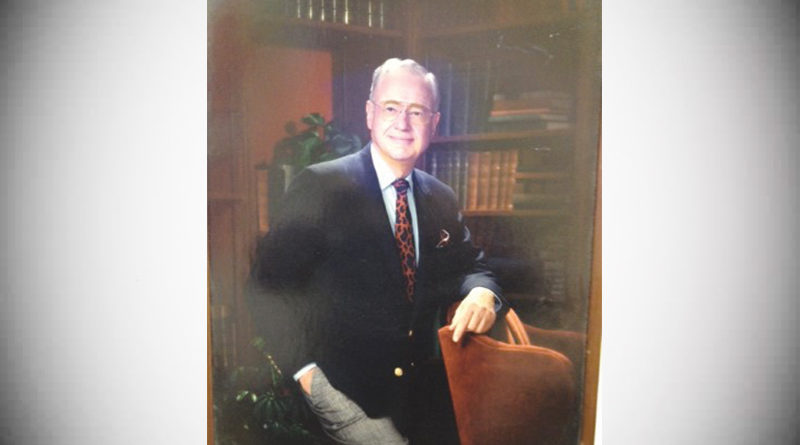 George Farrell Ray Jr. was welcomed home by his Lord and Savior Jesus Christ on February 26, 2016, at the age of 89. He trusted Christ as his personal Savior in 1982 while attending Northwest Bible Church. In recent years, he attended Park Cities Presbyterian Church. Farrell was born in Wichita Falls, Texas on February 16, 1927, the son of G. Farrell Ray Sr. and Ruth Smith Ray.

In 1932, his family moved to Dallas, where he attended Bradfield Elementary and Highland Park Junior High and Highland Park High School, and ultimately graduated from Texas Country Day School (now St. Mark’s) in 1944. He entered the Massachusetts Institute of Technology in the fall of 1944, then served eighteen months in the U.S. Navy from February 2, 1945, until he was honorably discharged on July 16, 1946.

Following his naval service, he returned to M.I.T., later transferring to Southern Methodist University, where he graduated with a B.S. in Electrical Engineering in 1950. While at SMU, he met Barbara Lisenba on a blind date, and they were married on March 25, 1949. Farrell joined his father and uncle, John Harlan Ray, as a partner in Ray Oil Company in 1950. He thoroughly enjoyed every aspect of the oil patch—from negotiating leases to drilling and operating the wells. His career in the oil industry spanned more than sixty years.

His community service included the SMU Mustang Club and Alumni Association, YMCA Camp Grady Spruce, and the Board of the Dallas Independent School District, serving with the DISD for two years. He was an active member of both the Dallas Country Club (President in 1988) and the Dallas Petroleum Club. Farrell enjoyed golf, tennis, and boating, as well as family vacations in Colorado, Wyoming, Michigan, and Florida. He and Barbara enjoyed travels to Alaska, Hawaii, and various international destinations.

Farrell delighted in his family. He was a loving and devoted husband, father, grandfather, and great-grandfather. He is survived by his wife of sixty-six years, Barbara, and three sons: Farrell III and Janet (Dallas), Robert and Anne (Dallas), and Charles and Debbie (Coppell). His grandchildren are Harlan & Melissa (Dallas), Catherine & David Howell (Austin), Lucy Anne (Austin), Ruthie (Boone, N.C.), and Thomas (Coppell). Great-grandchildren are Henry, Hattie, and Lucy Jane Howell. The family would like to express their appreciation to Farrell’s caregivers: Kathy, Pat, Devonna, Esther, Brenda, and the staff at Caruth Haven Court.

A memorial service will be held Friday, March 4, 2016, at 1:30 p.m. at Park Cities Baptist Church, Ellis Chapel. Funeral arrangements have been entrusted to Restland Funeral Home and Memorial Park, 13005 Greenville Avenue, Dallas, TX 75243. The family requests that in lieu of flowers, donations be made to the SMU Mustang Club, Dallas Theological Seminary, or the charity of your choice.