Emily Walther, 6, didn’t know there were other children like her who were living with Type 1 diabetes. She would get frustrated at school when, for instance, during a field trip, teachers passed out marshmallows to every student but her.

“For a while she was bottling up,” said her mother, Kathryn Walther. “And [she] didn’t know how to communicate frustrations like, ‘why am I the only one who gets these shots?’”

Then Walther found Camp Sweeney, a high-tech, medically equipped camp owned and operated by the Southwestern Diabetic Association for children ages 6 to 18, the majority of whom have Type 1 diabetes.

Some campers are also pre-diabetic or have Type 2, formally called adult-onset diabetes, according to senior associate program director Preston Walhood. During three-week sessions, campers can choose classes to attend, from rock climbing to radio station operating to lacrosse, and all the while they’re being taught about their bodies and how to live well with their disease.

About one in every 650 children has Type I; that’s roughly one per elementary school. And on top of its relative rarity, it’s not very well understood by the general population, Walhood said.

Benton Bagot attended Camp Sweeney from ages 5 to 17. He says he’s always been bothered by the misconceptions that come with having Type 1. “I used to write the medical association and say, ‘hey, you need to change the name!’ for like 10 years,” he said. “Everyone knows what diabetes is, but they think it’s Type 2, not Type 1.”

For Bagot, Camp Sweeney was a freeing experience. “You’re in an environment where you don’t have to worry about it,” he said. “The anxiety’s gone. It was like a vacation.”

Bagot started gaining independence and knowledge about his diabetes at a very young age at camp, starting with his first self-administered insulin shot. “My mom was helping me when I was 5,” he said. “But then at 6 years old I was figuring out how to fill up the syringe and do things that first-year med students are learning.”

Camp Sweeney is the largest camp of its kind. According to Walhood, it attracts campers from 46 states and countries such as Singapore, Saudi Arabia, Mexico, and Germany.

To keep providing programs and support to 252 campers per session in 2016, it will take about $3.5 million, Walhood said. So the administrators of this nonprofit camp are always trying to raise money to provide scholarships for children whose families can’t afford the steep tuition. And they usually do.

The camp’s fourth annual 5K fundraiser is set to take place in Lake Highlands on Memorial Day. There will be a bounce house, face painting, live music, and food.

“A lot of these kids think they’re alone,” Walhood said. “So our biggest goal is to reach as many kids as we can… and to give them the opportunity to come to camp and learn how to care for themselves and live a long and healthy life.” 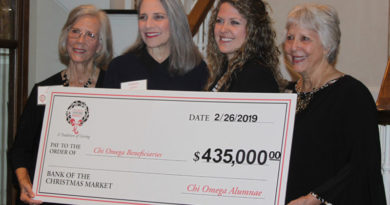 Supporters Are Sweet for Camp Sweeney