Johnathon and Justin Berry are used to the double-takes.

After all, there aren’t many sets of identical twins that compete alongside one another in the same throwing events. And there are even fewer that stand just 5-foot-7 in events typically filled with giants.

That diminutive stature might not attract much attention before the St. Mark’s seniors compete in the shot put or discus, but the Berry brothers certainly capture the eye afterward. Both have been regular medalists for the Lions for the past three years.

Their final opportunity to compete for St. Mark’s will be on their home turf at the SPC spring championships this weekend. Johnathon will be strong medal contender in both events, while Justin has an outside chance in the discus.

The siblings tried various other sports — wrestling in middle school, football in high school, even water polo for a year — before settling full-time on throws, which fit their strong frames and stocky builds.

“The first reason I decided to to it is because there’s no running at all,” Johnathon said. “Running is the worst part of every other sport.”

Both Johnathon and Justin enjoy the discus more than the shot put, because it combines strength and technique as opposed to raw power. It’s also the best event for Johnathon, whose distance of 158 feet at a meet earlier this season ranks fifth in school history.

“I think it helps them. They motivate one another,” said longtime St. Mark’s track coach John Turek. “They’re very even-keeled and don’t run the emotional gamut. They’re very driven and passionate. I can always count on them to work hard and train hard.”

The Berry brothers are nearly inseparable — always training together, sharing almost identical class schedules, and participating in the same extracurricular activities, such as drama and band – but is there a sibling rivalry among them when they’re each throwing for a gold medal?

Both insist that’s not really the case, that there’s no resentment when one loses to the other, which happens every time.

“I try to stay away from a rivalry mindset with my brother,” Justin said. “If anything, I get angry at myself for not throwing further.”

Track and field (at St. Mark’s) 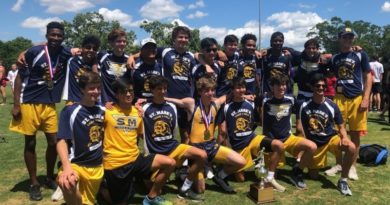