The Rangers (17-2) won the first crown in program history by avenging a 9-6 loss to the Scots during the regular season.

“I’m just so proud of this team, and especially our seniors,” said Jesuit head coach Chris Surran. “They’re a class act, and this an experience they’ll remember for the rest of their lives.”

A day before upsetting the defending champions, Jesuit reached the title game by rallying past rival ESD 8-7 in the semifinals on Saturday.

“We were just able to run our stuff better than we did when we faced them early in the season,” Sprock said of the HP rematch.

Jesuit got on the board first at the 8:20 mark of the first quarter on a goal by Grayson Hassell off a Sprock assist. Sprock, a sophomore who’s verbally committed to Virginia, followed that up with a goal of his own with just 20 seconds left in the quarter.

Jesuit took a 3-0 lead early in the second quarter on an unassisted goal by Garrett Munck.

HP got back in the game with an unassisted goal by Jackson Durham. And the Scots (17-2) cut the deficit to 3-2 when Hoyt Matise at the start of the third quarter.

“We were in the game there at the beginning of the second half,” said HP head coach Derek Thomson. “But we’ve got to be able to finish.”

Garrett scored his second goal on an empty net with 5:52 left in the third period, and Hassell rifled a shot into the upper-left corner from 5 yards out to put the Rangers on top 5-2 with three seconds to go in the third quarter.

“We executed very well offensively,” Surran said. “Our execution and steady defense was the difference today.”

The game was still in question early in the final quarter, but Jesuit, already leading 5-2, outscored the Scots 4-2 to put the game away. Sprock’s last score was another unassisted goal with 2:48 left in the game.

HP scored late on Matise’s second goal of the game. The loss snapped a 14-game winning streak for the Scots, and was their first defeat against an opponent in Texas this season.

“We didn’t play our best game,” Thomson said. “It’s tough on our seniors — that’s who I feel for the most. They represented our school with such class on and off the field their entire careers.” 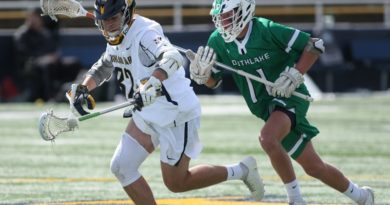 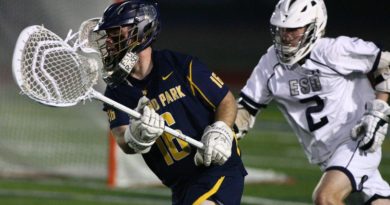