HPISD hosted an official groundbreaking ceremony for the new elementary school in the former Northway Christian Church lot on June 20, with representatives from the board, the city of Dallas, the facilities advisory committee, and the new school’s neighbors in attendance.

Guests were treated to a performance from the UP Elementary Choir, who will be some of the first students to attend the new school when it opens next August.

Renderings of the building’s facade were on display during the ceremony. After the groundbreaking, Jonathan Aldis of Stantec, the architecture firm hired by the board, explained to onlookers certain adjustments that had been made since the hearing at Dallas City Hall in May for the city’s approval to rezone the property – a process that Dallas City Councilwoman Jennifer Staubach Gates, who represents District 13 where the school is located, described as “epic”.

HPISD spokesperson Jon Dahlander said that since the hearing, when Dallas gave their unanimous approval for the site plan, the board has been meeting with neighbors and making further design adjustments based on these conversations.

For instance, Aldis pointed out how the window design has been modified so that instead of running the length of two floors, the windows are broken up and run horizontally, creating a more spacious look.

The board will continue to be available for feedback, and plans to have a hotline open during construction, according to facilities chair Jim Hitzelberger. Check back here for more info.

Construction is set to begin June 23. The school will open to UP Elementary students for the 2017-18 school year, while their school is being rebuilt. 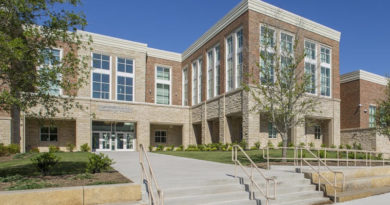